Here's a picture I shared before of the backyard, really the side yard.  There is a huge deck there. I've starting to think about where I want flower beds.  Vegetable gardening is on hold for now though I may put a vegetable or two in a pot on the deck. 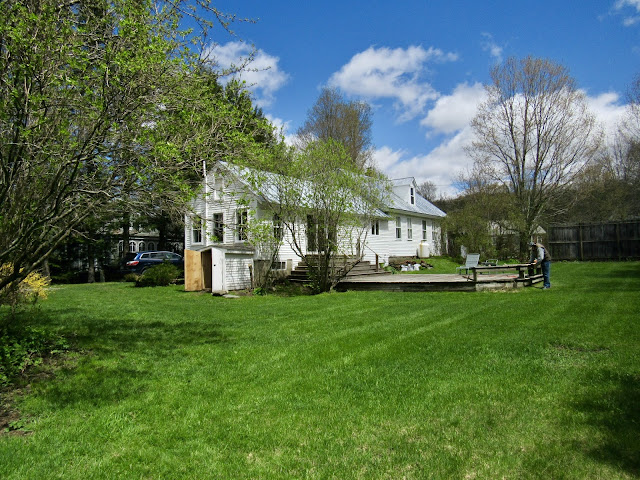 Coming out of the slider to the left is this bed that had a raised bed frame in it on two sides only.  Dan pulled that up, put it on the side of our road, and it disappeared to someone else's yard.
There are day lilies there, two kinds judging from the leaves.  The daffodils came up at the bottom right corner as did irises.  The strange "asparagus" like plant came up there on the bottom left corner. 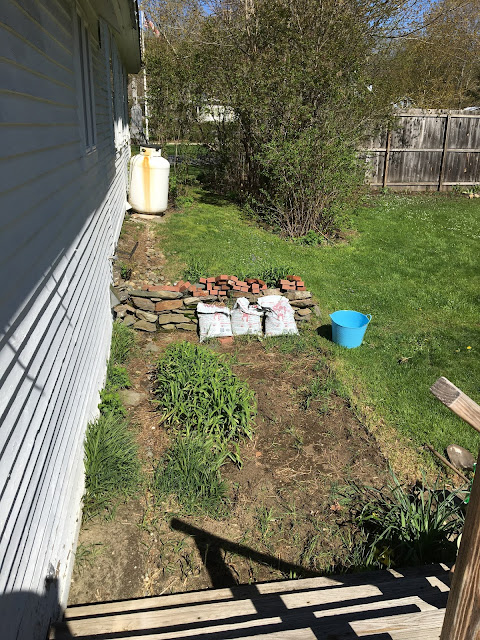 There was mint showing itself too so I dug it up and potted it.  The green pots have gloriosa daisies from Emily. The steps down to the deck make the perfect spot for pots. 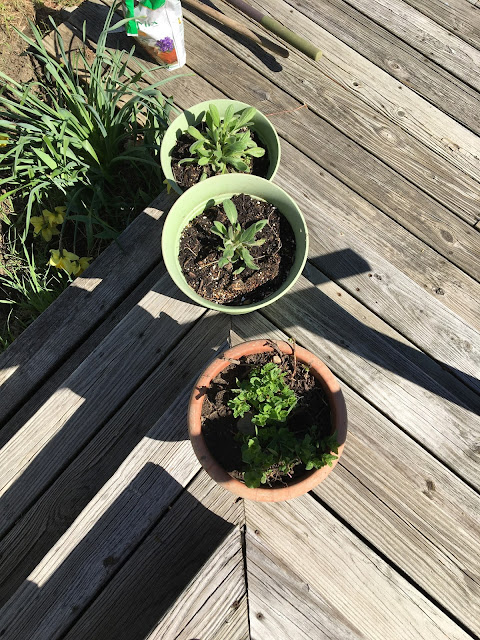 I will be adding more potted flowers once we're passed the frost date here.
Looking right are steps down too.  Once those old lilacs are removed I want to make this a flower bed with stone walkway though to grass. 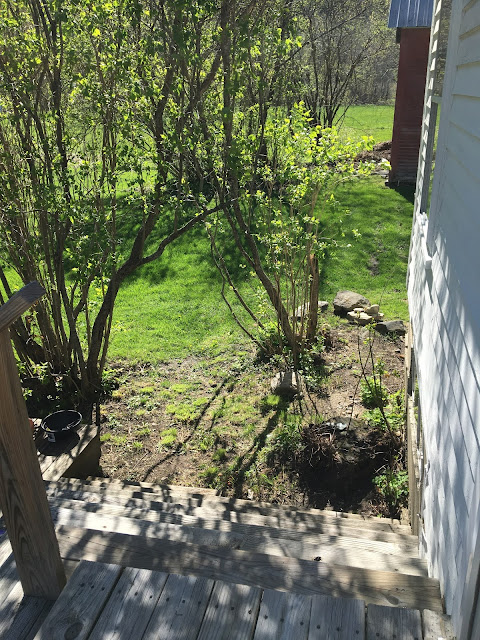 I moved some of the irises to the front edge of the deck.  There was something in this bed I remember from when we first saw the house. I thought I'd come across it in digging and I did.  One bulb of some sort.  I wondered if it was gladiolas but Emily says they don't winter over here. 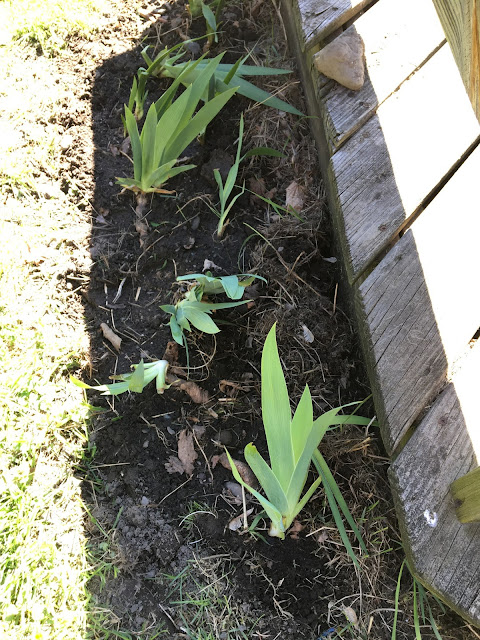 In the bed on the other side there are Shasta daisies that were here.  I added one lupine volunteer from Emily's garden. 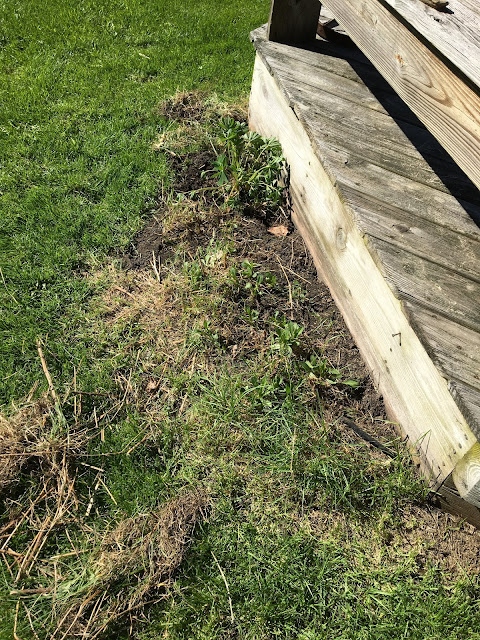 We have this fence separating us from the road.  I was thinking it would be great for a perennial garden but again Emily advised me to slow down as the leaves are not out yet and I can't know the shading until that happens.  There are some perennials there and weeds of course. 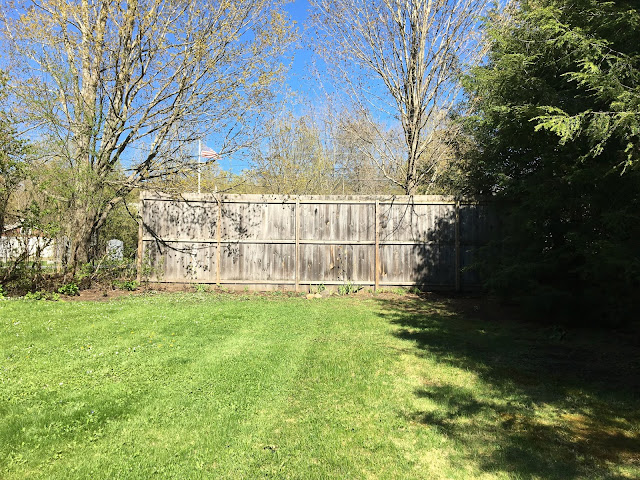 I did transplant some day lilies, lupine and Columbine there and later Dan helped me move rocks to form a border. 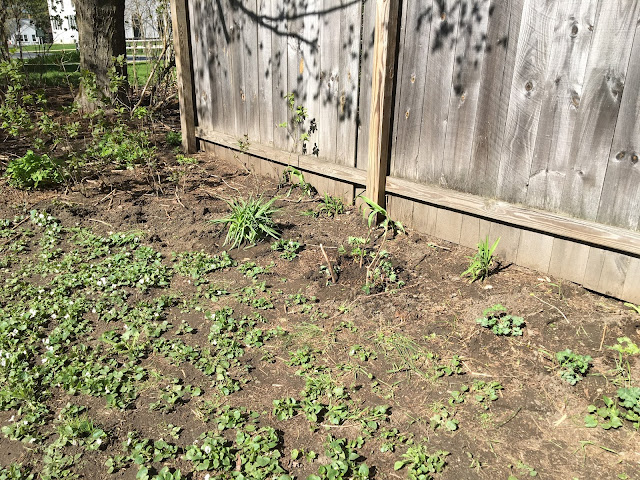 Eventually these scrubby lilacs will go too and I should be able to extend the bed there. 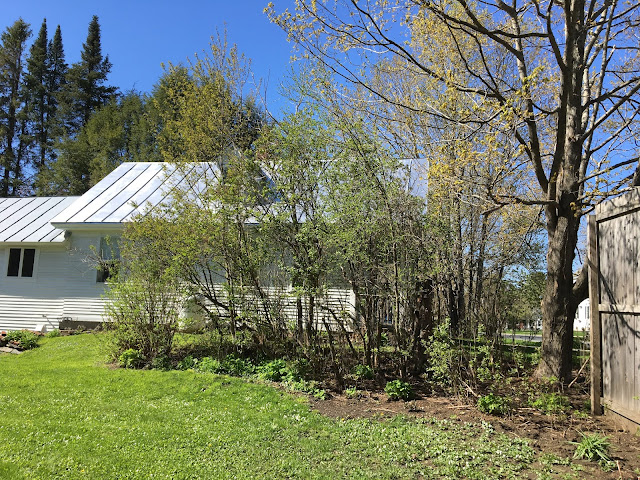 Out front are two narrow beds on either side of the step. 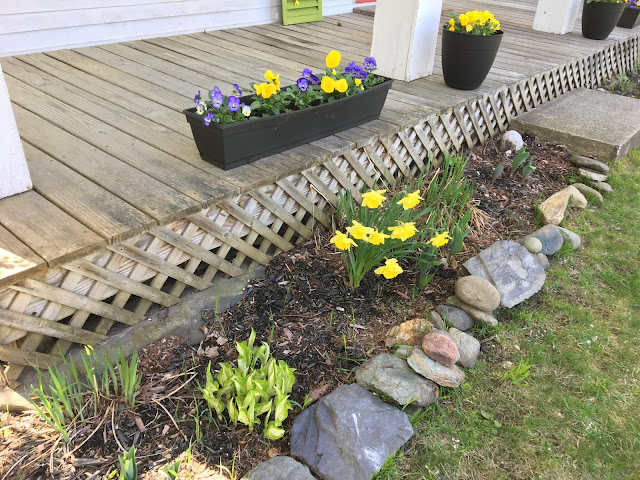 Even though this faces east it's heavily shaded by the house except in the morning. Emily planted tulips here that are just now setting buds.  There are hostas on either end and Siberian iris I think too.  I also rounded up rocks to temporarily define the beds.  The house will be painted in July and the front porch and lattice work will be stained.  If I plant anything else there I wonder if it will survive that July activity. 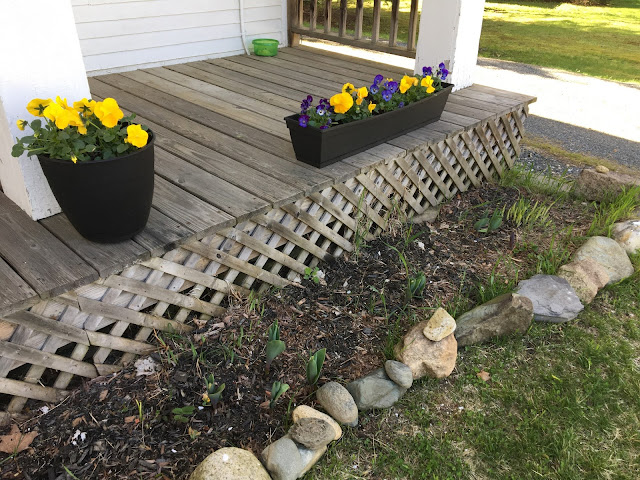 On the north side of the house is this strip with the worst color mulch on it.  Slowly there are hostas showing in spots.  It would be a good place for some shade annuals but again what happens when the power washing, scraping and painting happens? 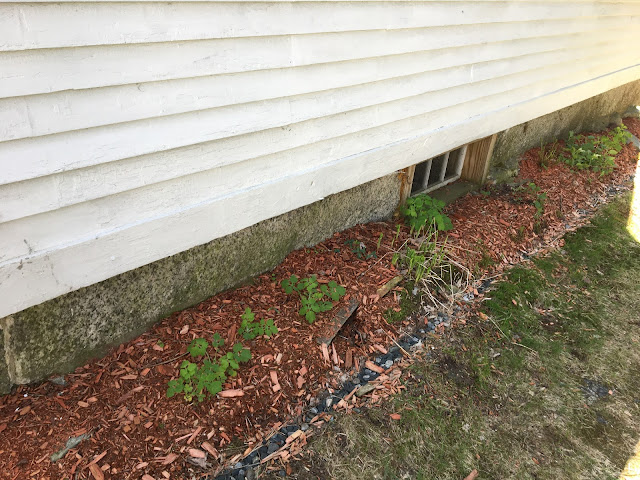 No flower beds planned for around the barn but wanted to share this huge bed of Siberian iris that's there. 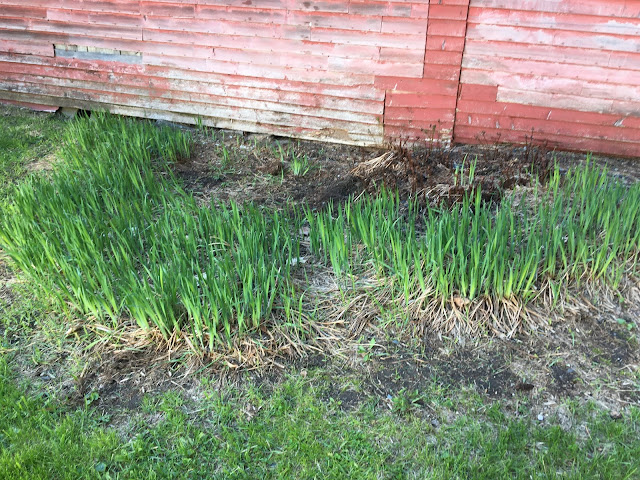 Behind it is a clump of ferns, though I don't know what kind yet.  I managed to dig up some of the ferns and move them to the fence bed but couldn't get under any of the iris.  With the work planned for the barn and driveway, Dan says these plants will likely go. 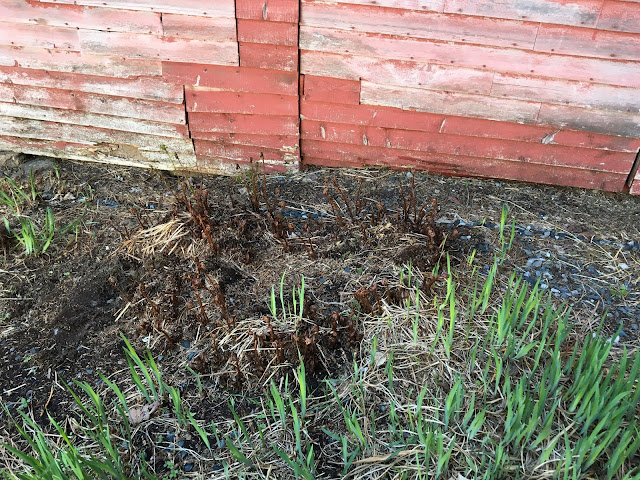 So lots of planning, mostly in my head at present.
If you want to see what kind of garden I once had go here.  The D.P.P. I refer to in that early spring post was my Deer Prevention Plan.  We moved from that house in June 2016 and I thought I'd given up gardening.  I guess not because I'm looking forward to doing beautiful things here in NH.
***
On another topic I updated my books read for 2021.  See link below this post.  There are some good books I'd recommend to readers out there.
I'm not reading at the same rate as other years because of other house tasks taking up time.  But I still try to carve out time to read when I can.
Posted by Marcia at 5:00:00 AM

...mint can take over. You can never have too many Siberian Iris though.

Yes, good planning about the painting jobs. Glad you've gotten interested and I bet you'll have a bright garden to enjoy in your new home! Do some veggies too, you'll enjoy eating them!

It should be glorious once you get the gardens to how you envision them.

Exciting to be planning the new beds. You've got a lot of work ahead of you there.

You have some fine plans for the garden. It will be interesting to see the changes.

Your plans sound great and will be so exciting to see all the blooms next year after the New Hampshire winter. I'll check out your reading. Not that my to be read list has decreased, but always on the lookout for new books. Take care!

What fun to have a whole new place to beautify and existing planing to work with! By next year it'll be gorgeous!

It’s like taking out a new canvas and planning what to do with it! You don’t have a long season to work with either. Its such fun to plan and in a couple years it will all look as lovely as your old garden. Oh, yes, there will be a lot of hard work ahead, too!

You have flowers there. I think it was a good idea to move the mint to a pot. It can go wild.