Just a few minutes ago I sat down at my desk to look at emails and caught a sound. Was it my laptop? No.  It was outside so I looked out to the pond and realized that the frogs have come out of hibernation, probably from the mud in the bottom of the pond.  They were announcing to the neighborhood that they were back and raring to go for another spring. 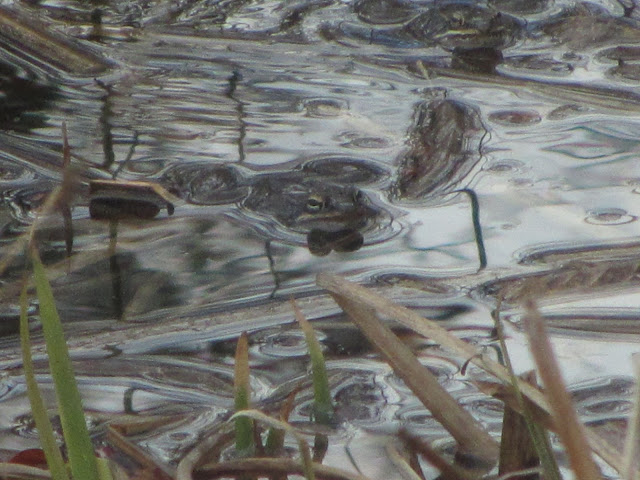 One of many frogs showing off. 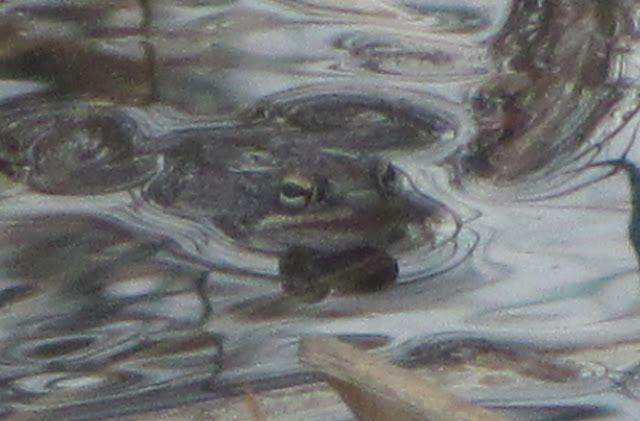 Photo taken through the window so not very clear. 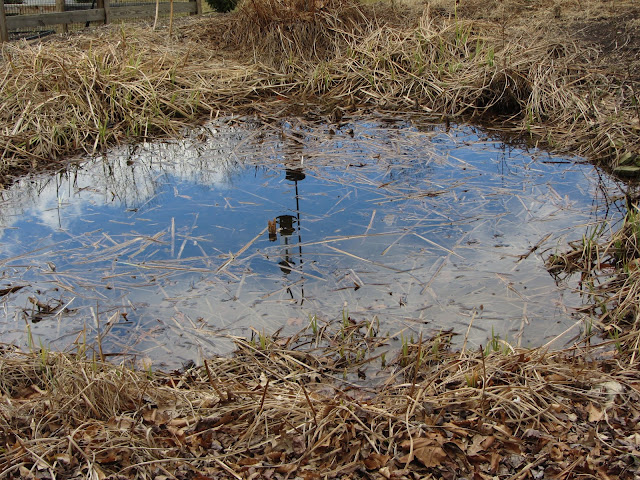 Once I stepped outside the frogs all dove under.  They must have thought I was a heron. You can see the pond is filled with stray leaves.  The irises also need a major trimming, I know.  It's on the spring to do list.

I had hoped to clean out the loose leaves that accumulated in the pond after trimming the cat tails and knew I needed to do it before the frogs started laying eggs.  Now I know I need to do it in the next days or I will have to disturb the eggs.  Today should be the day except I'm recovering from a terrible cold and have expended all my energy for today vacuuming and mopping floors.  Time to put my feet up and drink something good and hot.
Posted by Marcia at 2:11:00 PM 6 comments:

Believe it or not I do have my first harvest of 2013.  Two carrots that wintered over.  We had them in a salad and they were nice and sweet. 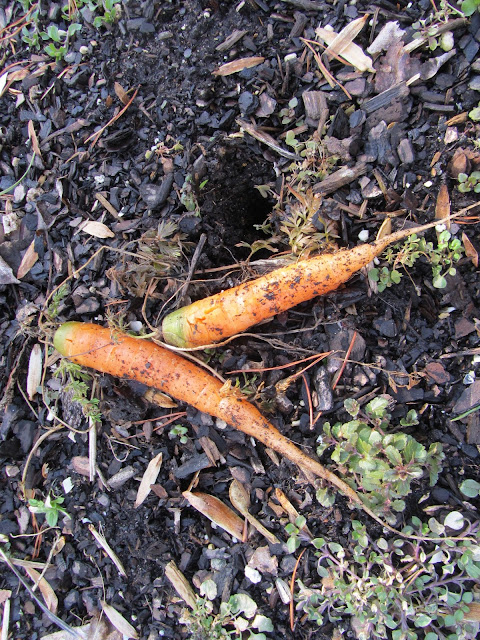 Here's how the rest of the vegetable garden looks. 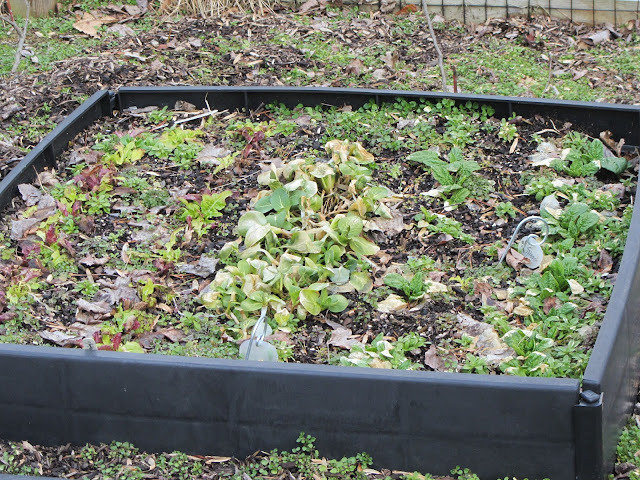 Mesclun, bok choy and spinach will need some warmer days to green up and need some weeding. 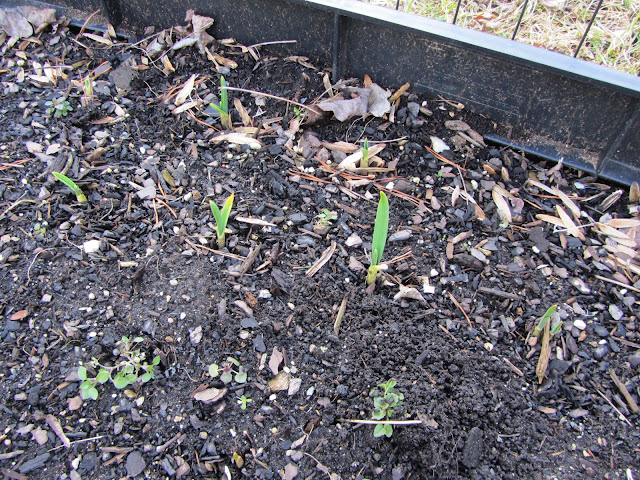 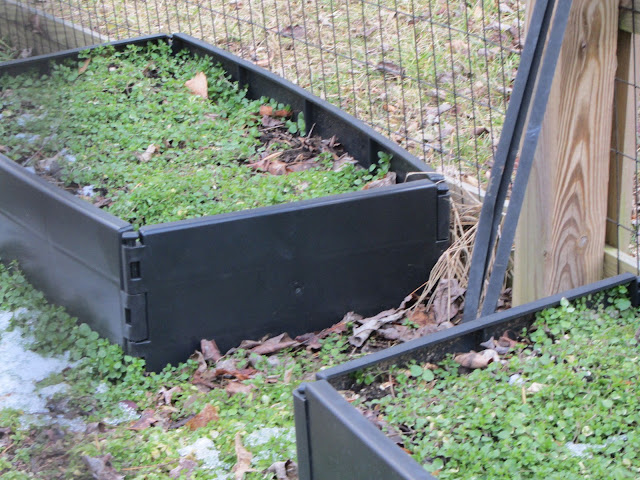 The rest of the garden paths and beds have a prolific week growing all over them.

Warmer days are coming and it will be time to plant snow peas, lettuce, carrots, bok choy and other spring crops.  Can't wait!

See other harvest at host Daphne's Dandelions.
Posted by Marcia at 9:38:00 AM 7 comments:

Snow is predicted overnight but I couldn't stay in with the temperatures today reaching the 60ºs.  It was time to tackle the trimming of the grasses and some other high perennials around the pond. 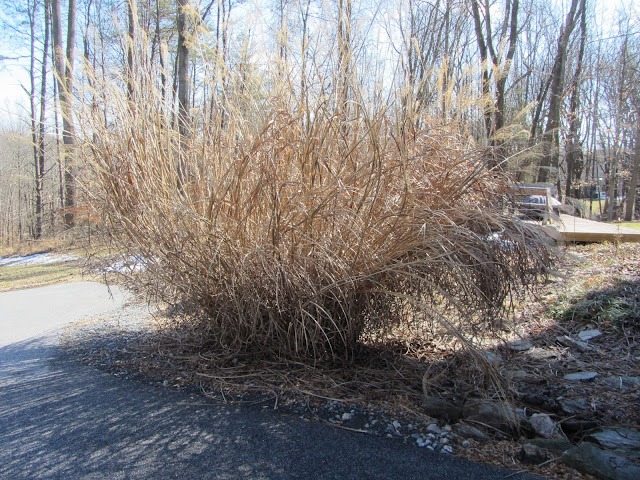 Miscanthus - actually three clumps.  I need to transplant these this spring for sure and leave just one behind. 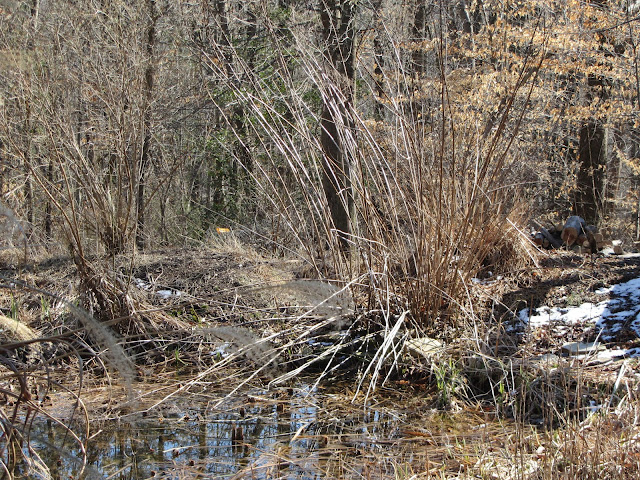 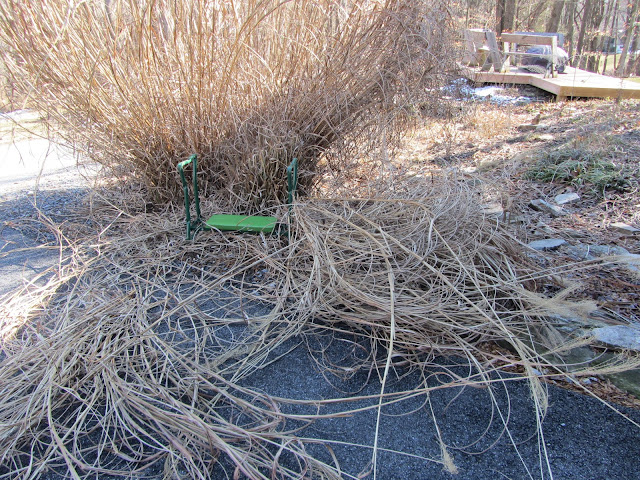 The process begins but kneeling and using just a hand clippers was too difficult. 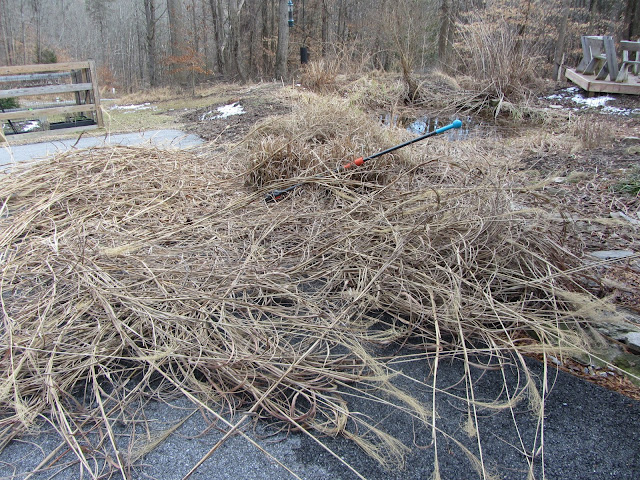 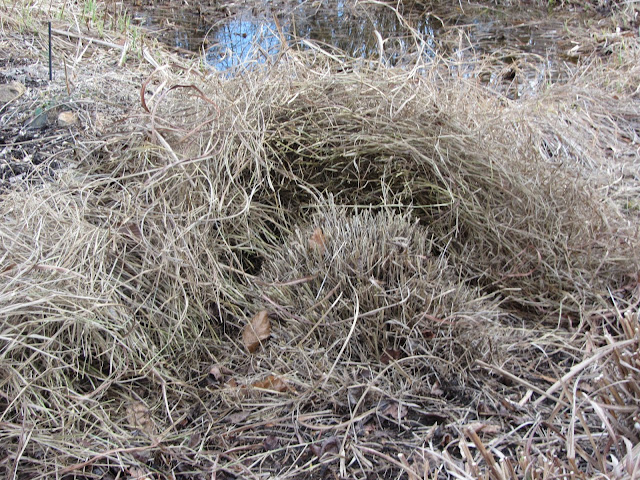 Another grass next to miscanthus.  Frequently overshadowed by it. 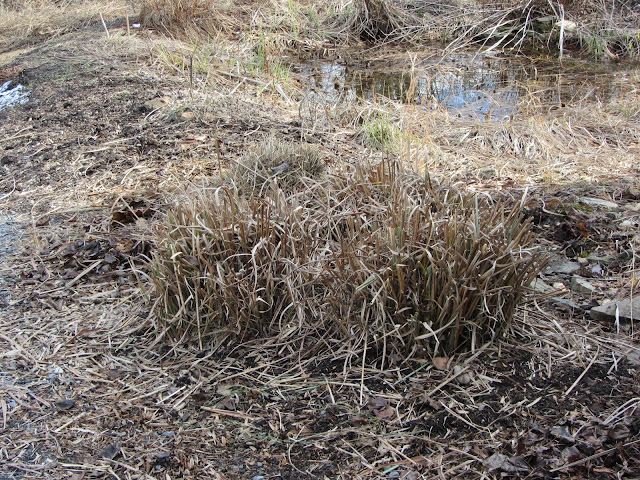 On to other plants. 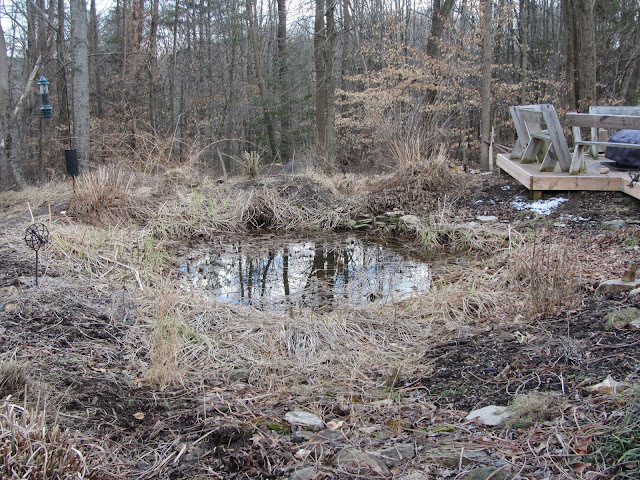 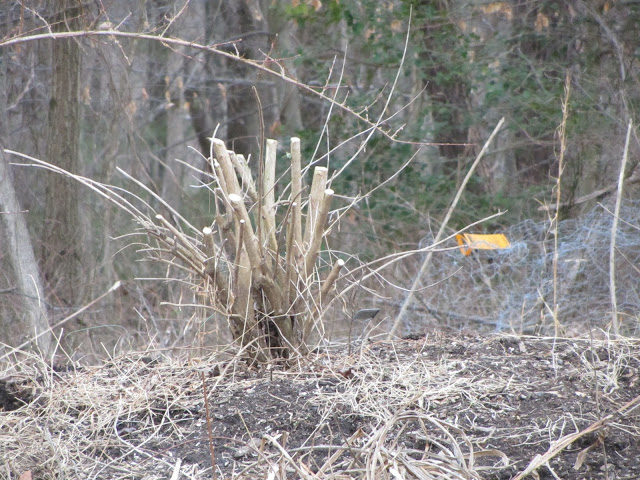 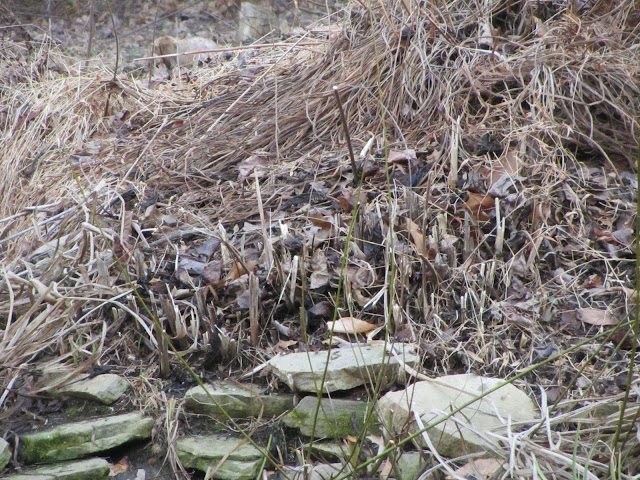 Joe Pyed trimmed - was that easy.  Just snap off the stems. 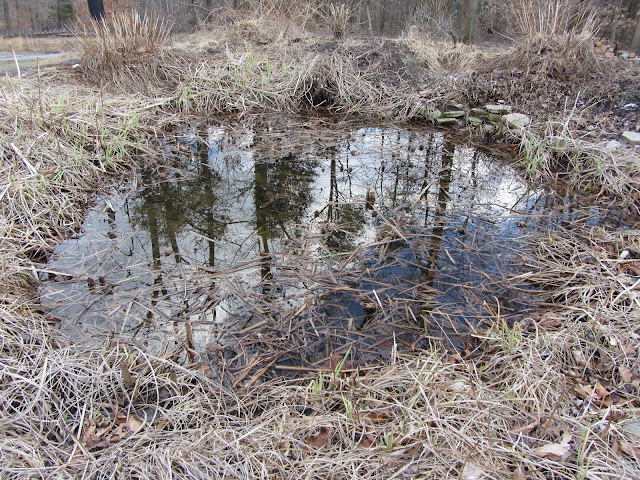 More to be done another day.  Pond needs to be cleaned out but for now goldfish need a place to hide.  Iris need to be trimmed. 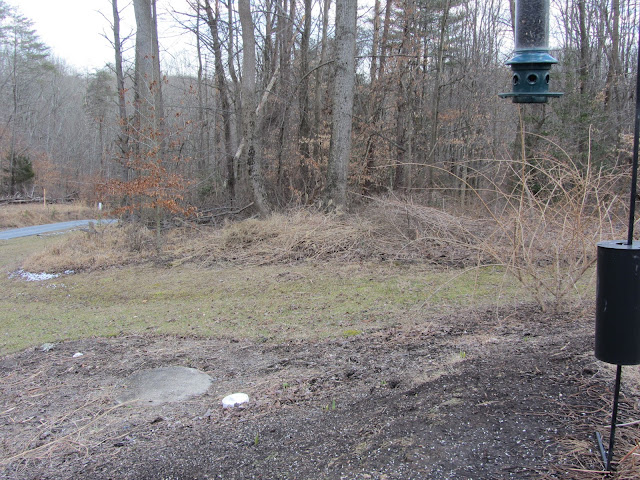 The pile of cuttings goes to the edge of the woods.  The birds will still have a place to hide out. 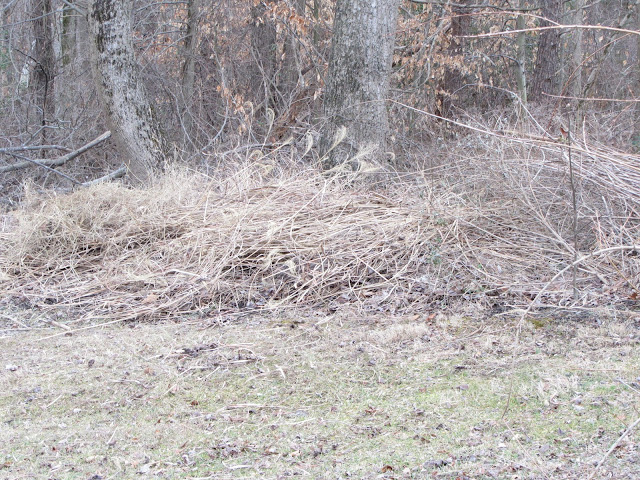 It took me four different tools until I settled on this one. 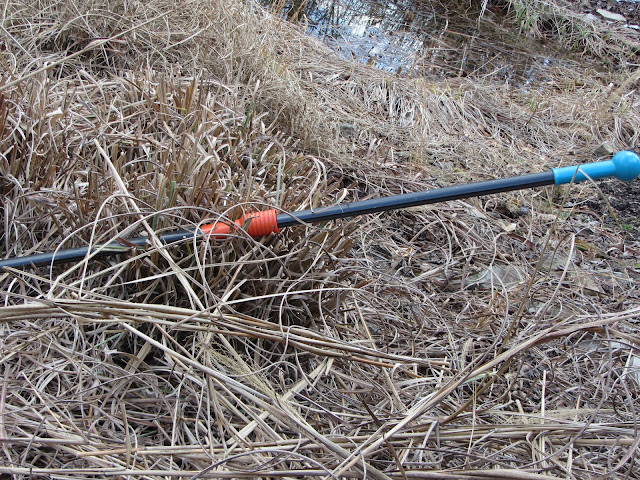 There is still more to do but it's a start of a long process that spring like weather for today tells me that I won't have to wait too long for spring to arrive.  After all the plants think its coming too. 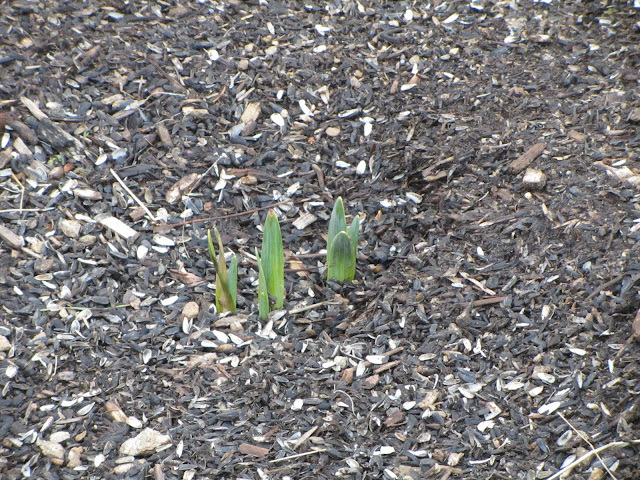 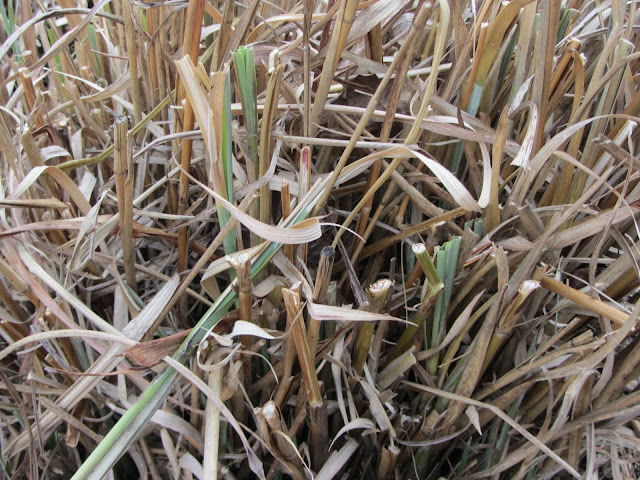 Email ThisBlogThis!Share to TwitterShare to FacebookShare to Pinterest
Labels: spring 2013

It's been awhile since I've posted here.  Life has taken precedence.  The business of living - shopping, cleaning, organizing, visiting, relaxing, planning, nursing, worrying.  You know what I mean.

I took these photos today because I had planned to take photos of the signs of spring.  An overnight snowfall changed that idea. 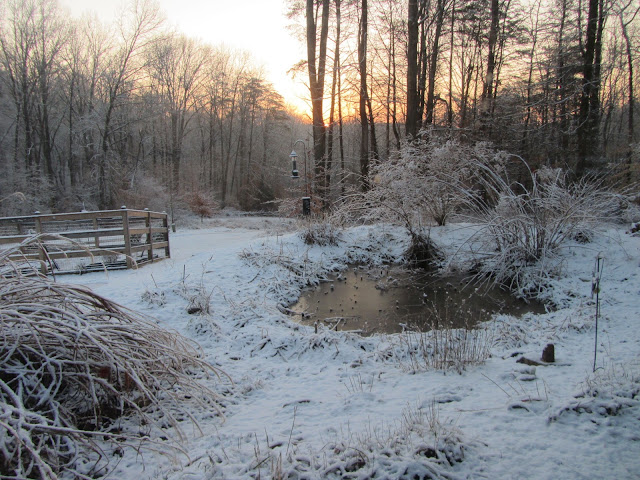 The snow will be fleeting as are many things in life. 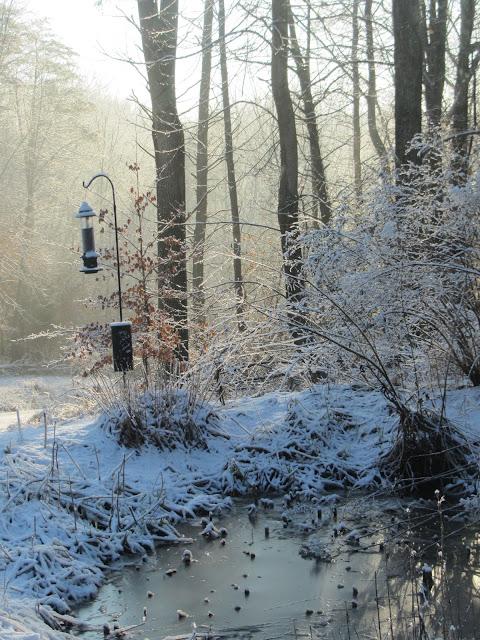 I've been on the road making three trip to care for my mother who fell on Friday evening. The broken bones are in her cheek.  She will be okay but at 94 life gets harder each day.

A neighbor suffered a major fire at their home.  (See this posting about that.) I've signed up to take them meals.  I've gotten the community galvanized to raise money for them especially since she was the one to do that when others were in need.

Life!  Will things change when spring arrives?  I doubt it.
Posted by Marcia at 9:45:00 AM No comments:

My reading list is not as long this year so far.  At this rate I won't make it to the same number that I got to last year.  I have started many books and then put them down for lack of interest. I'm not going to read something I don't enjoy.

I did just finish my 5th book for the year: One Thousand White Women - The Journal of May Dodd by Jin Fergus.  The author says that many people write to him believing that the book is historical.  It does have historical characters and yes the Cheyenne Indians asked for 1000 white women to marry their men but the US government did not agree to it.  In his book though they did and May Dodd was one of those women.  It's written as a journal except it's not really.  No one writes a journal with so much dialog and details especially when they are on the move with an Indian tribe.  It does make for a good though sad story and I'd recommend it for that.  But I don't know how any reader was taken in to believe it could be true.

The other books I've read this year are:

1.  The Unlikely Pilgrimmage of Harold Fry by Rachel Joyce.  Set in present day England this relates the story of an elderly gentleman who sets out on a quest to walk the entire south to north axis of England to see an old friend who is dying of cancer. He becomes quite a celebrity and develops a following that gets out of hand.  Slowly you learn what has transpired in his life that drives him to do this.

2. The Autobiography of Mrs. Tom Thumb by Melanie Benjamin.  This one was for book club and it generated so much discussion that night.  Mrs. Tom Thumb, Vinny, was a real person and though she did leave some writings about her life she did not write her own biography.  Melanie Benjamin did a fine job for her though and gave the reader a window into the world of P.T. Barnum and what life was like for a performer the size of Vinny.  We got out a yardstick the night we discussed this book to see what her height really was.  Our hostess then got out a doll that stood just a few inches shorter than Vinny's height but about equal to her sister, Minny.  Amazing!

3. Loving Frank by Nancy Horan.  I almost didn't finish this one because I was afraid for how it would end.  When I get that way I do turn to the end to read it. (I do that a lot lately.)  This one is about a woman who gives up her husband and children to be with Frank Lloyd Wright.  A decision I couldn't condone and that she lives to regret.  The descriptions of the houses he designed made me realize how much influence his style had on our architect for our home.

4. Molaka'i by Alan Brennert.  This is the story of girl diagnosed with leprosy and confined to the leper colony called Molaka'i in Hawaii.  I had previously read a nonfiction book about this place called The Colony which was historical with none of the feelings of this book.  It's been awhile since I've read a book that made me cry so much.  It is an incredibly sad story but also so very believable.  This is also one for book club that we will discuss next Friday.

I think I'll go back an read an old favorite: The Guernsey Literary and Potato Peel Pie Society.

Have any book recommendations for me?
Posted by Marcia at 8:59:00 AM 3 comments: