As I sat at my computer here in my study early this morning, I happened to glance up to see my under the deck neighbor saunter across the lawn to the edge of the glen. I grabbed my camera to take its picture and there was the other neighbor, too. Unfortunately only one of the photos came out because it would only pose for one. 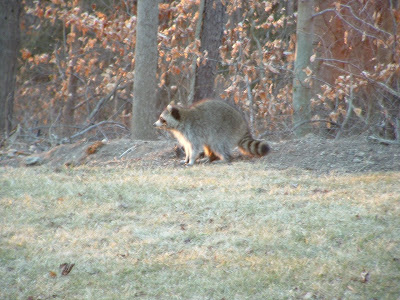 Email ThisBlogThis!Share to TwitterShare to FacebookShare to Pinterest
Labels: ANIMALS

I wish I had a photo to show the new neighbors we have .... living under our deck!

We've seen them a couple of times and most recently early this morning. In the latter case I believe the raccoon was returning from a night out. It calmly walked across the backyard from the feeder to the deck and ducked underneath. We've seen at least two and we've heard them squeal. At what? We don't know.

My one hope is that they have moved out the previous occupant - the groundhog - because I don't think the raccoons will eat my plants like the groundhog loved to do.
Posted by Marcia at 3:34:00 PM No comments:

Email ThisBlogThis!Share to TwitterShare to FacebookShare to Pinterest
Labels: ANIMALS 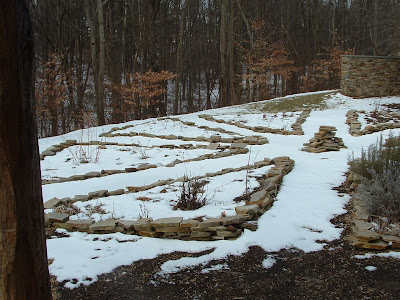 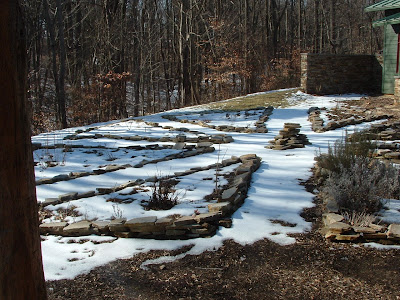 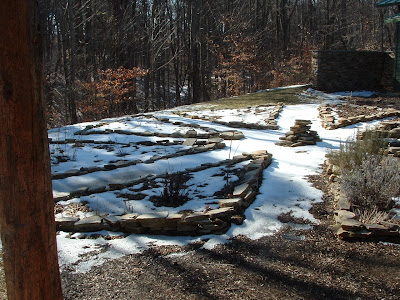 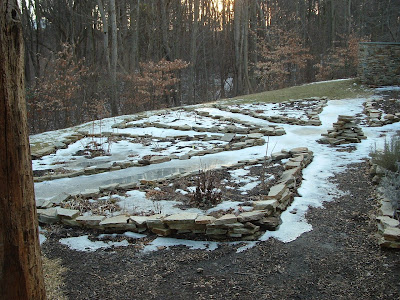 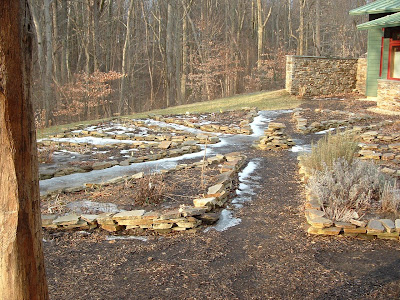 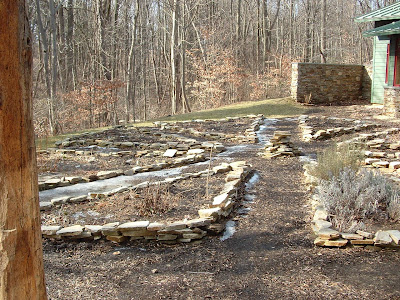 It's nice to see the snow disappear. However, it may just be a tease.

A special thanks to Matt, my son-in-law who helped me rescue all my iphoto pictures which had mysteriously disappeared as well from iphoto.
Posted by Marcia at 7:05:00 PM 2 comments:

... seen a squirrel pee? I hadn't either until this morning.

I was on the return leg of my mile round trip to get the newspaper (The NY Times now - no longer the Baltimore Sun, but that's another story). As I was passing the stone wall that borders the lane for a portion of it, I heard the sound of falling water hitting leaves. I knew it wasn't warm enough to be melting snow nor was there any snow left in the upper branches of the trees. I looked up to see the source and spied a squirrel. He was laying on a branch of a very old cedar tree, one of three that has been growing along this old stone wall for a very long time. I looked again at the spot where the "water" was reaching the ground then back at the squirrel. Yes it was coming from him/her. To paraphrase an expression of someone very dear to me: "All the world is a squirrel's room."
Posted by Marcia at 10:37:00 AM No comments:

Miracle on the Hill

We had light snow overnight last night. About an inch I think in all when we woke up. No school delay or snow day since forecast was for warmer weather. Report was that snow was not sticking to road surfaces, but someone failed to inform our driveway of that.

If you've never been to our house you wouldn't know that our driveway has a very steep grade just before it reaches the house. So leaving the house you go down a steep hill which then curves sharply to the right to a creek crossing before it levels out.

There was snow on our driveway and so I suggested to Dan that he drive us to work in my Subaru. He works one exit closer to home than I do. He concurred.

We started down the steep hill and the car started to slide. He managed to keep the back end from changing places with the front but couldn't slow down the slide. We both were tense until we spotted blacktop at the curve. No snow covering that part of the driveway! As we got closer we were sliding into the rocky drainage next to the driveway when the tires hit the clear pavement and took hold.

A miracle? Yes because at the creek crossing and the rest of the way to the lane the driveway was covered in snow. If the curve had been snow we'd have not made it around the curve and probably would have slid off the embankment on the other side into the wetlands.
Posted by Marcia at 7:31:00 PM 2 comments:

I joined a book club in January and since then have started reading more during this school year. This isn't a usual thing for me because evenings are taken up with school work, but I have been making time to read.

For the book club I read "Geography of Bliss" by Eric Weiner. Not a book I'd pick up to read on my own. I made the mistake of buying it, too. The same day I had heard an interview on the Diane Rehm Show with the author of "Dewey: The Small-Town Cat Who Touched the World" and decided to get it as well. It was a nice book with a heart-warming story though a little repetitive. A third book I also purchased that day was "A Thousand Splendid Suns" by Khaled Hosseini. I just finished it on Saturday morning.

"A Thousand Splendid Suns" takes place in Afghanistan and is eye-opening to what life was like for women during the time of the Taliban. I had wondered how women could put up with the treatment they were receiving, but now realize that for many of them it was all they knew and for others there was violent repression of their rights. The author tells a gripping story of two women Mariam and Laila. I can't say more without giving the story away. Read it if you haven't already.

My book club selection for February is "Water for Elephants" by Sara Gruen. I got it from the library this time. I'll let you know how it is.
Posted by Marcia at 4:20:00 PM 1 comment: