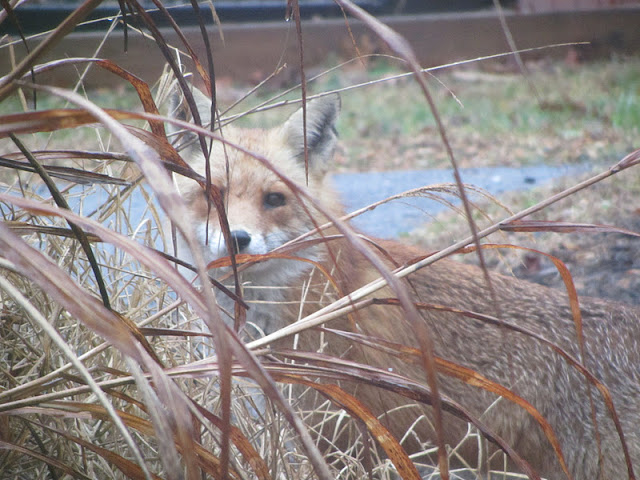 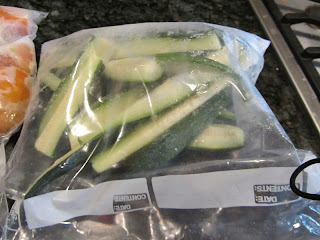 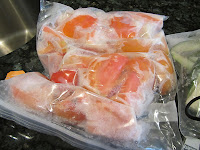 to make a sauce for pasta.  I sauteed an onion first then added the frozen items. 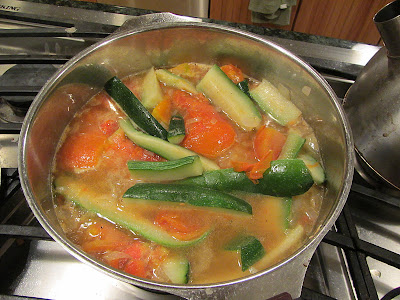 Once they were cooked down I added a piece of my frozen chopped basil (not pictured), a teaspoon of sugar, salt and pepper.  Using the stick blender I pureed the whole thing 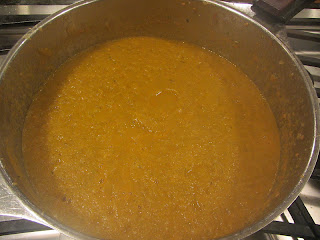 and served it over angel hair pasta and meatballs.  It was delicious. 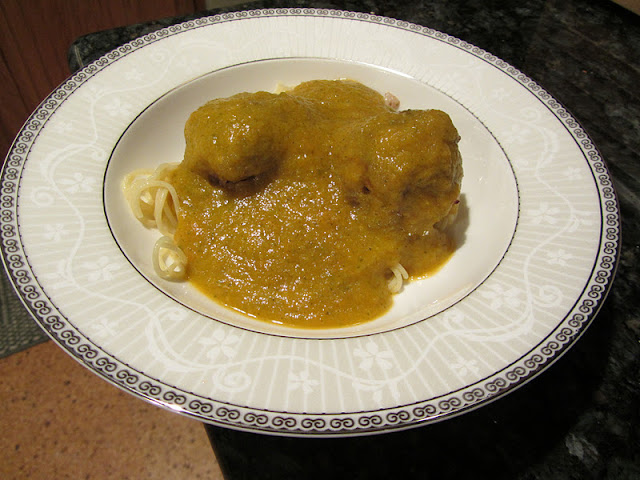 Joining Thursday's Kitchen Cupboard over at Robin's.
Posted by Marcia at 7:28:00 AM 5 comments: 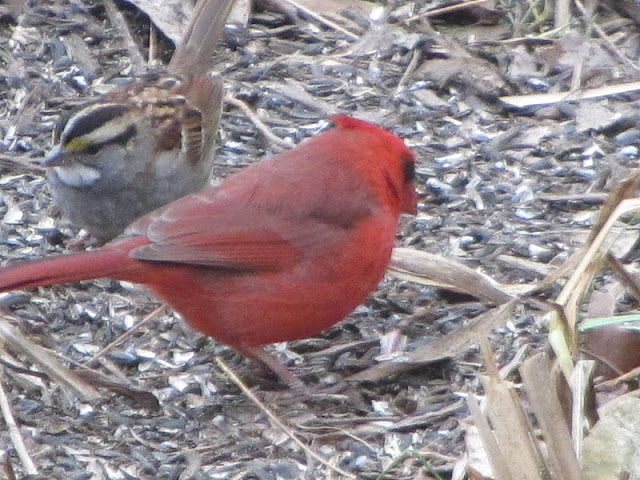 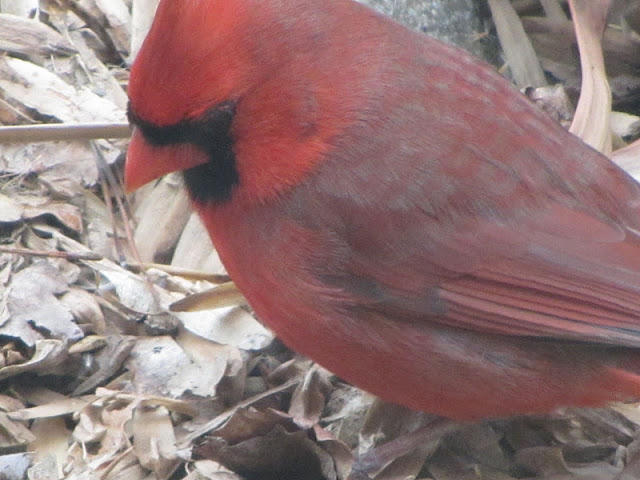 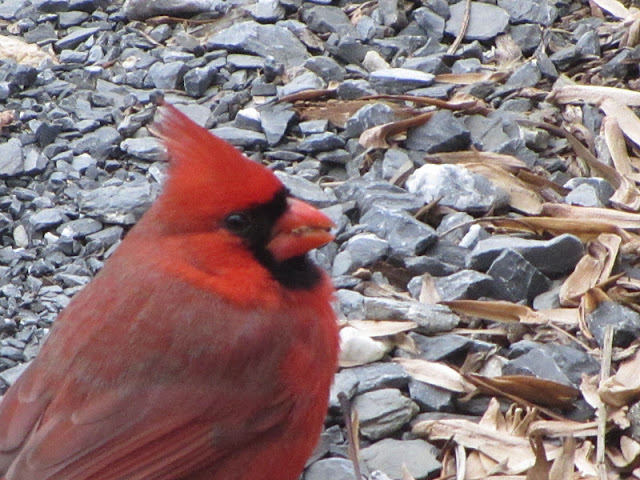 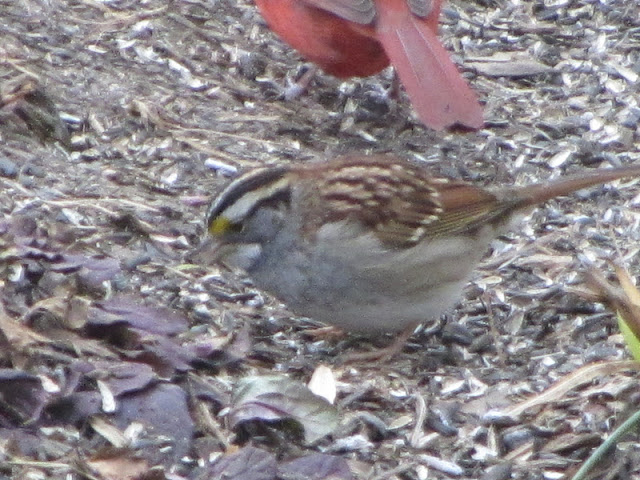 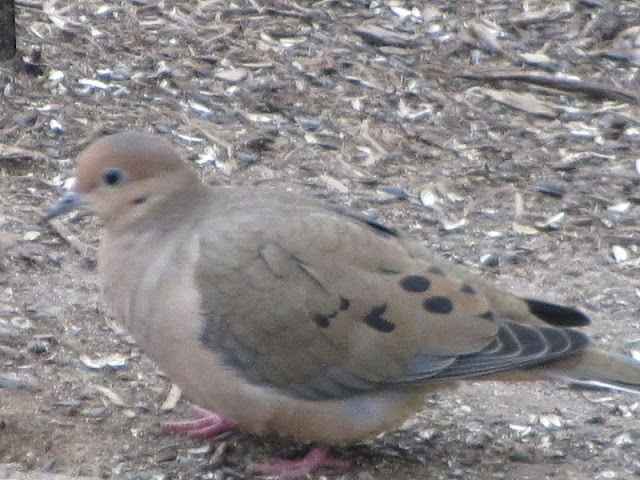 Know what GPOD is?  Garden Photo of the Day sponsored by Fine Gardening magazine.

A long time ago they requested that readers send in photos to be included so I did.  I heard nothing until I got an email from Michelle last week that they planned to feature my garden today!  Yes, my photos are there!  Here's the Link and please comment there, too.

Garden Photo of the Day

One of my goals in gardening was to be featured in a magazine.  I don't think I'll get the print spread I was hoping for so I'll take this recognition as meeting that goal.  After all it probably reaches more people than the magazine would anyway.

That's the number of books I read in 2011.  I didn't make the 100 goal but I enjoyed trying.   Here's the list of books in case you need some reading suggestions:

1. "Finders Keepers: A Tale of Archaeological Plunder & Obsession" by Craig Childs
2. "The Thirteenth Tale" by Dianne Setterfield (great book!)
3. "The Riddle of the River" by Catherine Shaw
4. "The Forgotten Garden" by Kate Morton (great book!)
5. "Year of Wonders -  Novel of the Plague" by Geraldine Brooks (fascinating!)
6. "House of Rain - Tracking a Vanished Civilization Across the American Southwest" by Craig Childs (interesting!)
7. "The Wolves of Andover" by Kathleen Kent
8. "Cutting for Stone" by Abraham Verghese
9. "Breaking Night: A Memoir of Forgiveness, Survival & My Journey from Homelessness to Harvard" by Liz Murray
10. "That Old Cape Magic" by Richard Russo
11. "Othello" by Shakespeare
12. "Whistlin' Dixie in a Nor'easter" by Lisa Patton
13. "Brooklyn" by Colm Toibin
14. "Gold Boy, Emerald Girl" by Yiyun Li
15. "Annie's Ghosts" by Steve Luxenberg
16. "Still Alice" by Lisa Genova (quite moving!)
17. "The Fortune Cookie Chronicles" by Jennifer S. Lee
18. "Ellen Foster" by Kaye Gibbons
19. "A Thousand Years of Good Prayers" by Yiyun Li
20. "The Princes of Ireland" by Edward Rutherfurd
21. "Garlic & Sapphires: The Secret Life of a Critic in Disguise" by Ruth Reichl
22."The Mapping of Love & Death" by Jacqueline Winspear (I love this series but start with the first one!)
23. "Double Comfort Safari Club" by Alexander McCall Smith (love this series too!)
24. "Death of a Chimney Sweep" by MC Beaton
25. "A Lesson in Secrets" by J. Winspear
26. "Finding My Voice" by Diane Rehm
27. "House of Seven Gables" by Nathaniel Hawthorne
28. "A River Runs Through It" by MacLean
29. "La's Orchestra Saves the World" by A. McCall Smith (wonderful!)
30. "An Artful Death" by Rod Jeffries
31. "33 Men _ Inside the Miraculous Survival & Dramatic Rescue of the CHilean Miners" by Jonathan Franklin
32. "Prayers for Sale" by Sandra Dallas (good read!)
33. "The Arm of the Starfish" by Madeleine L'Engle
34. "A Bride Goes West" by Nannie T. Alderson & Helena Huntington Smith
35. "The Chili Queen" by Sandra Dallas
36. "Whiter Than Snow" by Sandra Dallas
37. "Alice's Tulips" by Sandra Dallas (I got on a S. Dallas kick - all good)
38. "Tallgrass' by S. Dallas
39. "Unbroken" by Laura Hillenbrand (griping!)
40. "The Way We Were" by Marcia Willett
41. "The Red Garden" by Alice Hoffman
42. "A Play on Piety" by Margaret Frazer
43. "The Distant Hours" by Kate Morton
44. "A Summer in the Country" by Marcia Willett
45. "The Teaberry Strangler" by Laura Childs
46. "Death of a Gentle Lady" by MC Beaton
47. "The Big Shift - Navigating the New Stage Beyond Midlife" by Marc Freedman
48. "The No. 1 Ladies Detective Agency" by A. McCall Smith
49. "Morality for Beautiful Girls" by A. M. Smith
50. "The Kalahari Typing School for Men" by A. M. Smith
51. "The Lost Summer of Louisa May Alcott" by Kelly O'Connor McNees
52. "The Full Cupboard of Life" by A. M. Smith
53. "La's Orchestra .." 2nd time this year for book club
54. "In the Company of Cheerful Ladies" by A. M. Smith
55. "The Diary of Mattie Spenser" by S. Dallas
56. "The Miracle of Speedy Motors" by A. M. Smith
57. "Tea Time for the Traditionally Built" by A. M. Smith
58. "The Double Comfort Safari Club" 2nd time
59. "The Conjurer's Bird" by Martin Davies (fascinating!)
60. "22 Britannia Road" by Amanda Hodgkinson
61. "The Count of Monte Cristo" by Alexander Dumas
62. "Semi-Sweet" by Roisin Meaney
63. "The Saturday Big Tent Wedding Party" by A. M. Smith
64. "The Bride's House" by S. Dallas
65. "Prophet's Prey" by Sam Brower
66. "The Bells" by Harvell
67.  "Love on the Line" by Deeanne Gist
68. "Mutiny: A Novel of the Bounty" by John Boyne
69. "Missing" by Lindsay Harrison
70. "A Bride in the Bargain" by Deeanne Gist
71. "Deep in the Heart of Trouble" by D. Gist
72. "A Christmas Promise" by Anne Perry
73. "The Book Club" by Mary Alice Monroe
74. "The Persian Pickle Club" by S. Dallas
75. "Maid to Match" by D. Gist.

I'm back from my self-imposed hiatus from blogging.  Still not sure how committed I am to continuing to do this as a routine, so if you are a follower here's the caveat: I won't be regular!

I'm amazed and pleased that I do have a harvest to share on this first Harvest Monday hosted by Daphne's Dandelions each Monday.  Sarah made dinner for us on New Year's Eve and it required bok choy which we went out to the garden to harvest by flashlight.  These were grown from seeds Sarah sent from China to Emily and which Emily then shared with me this summer. 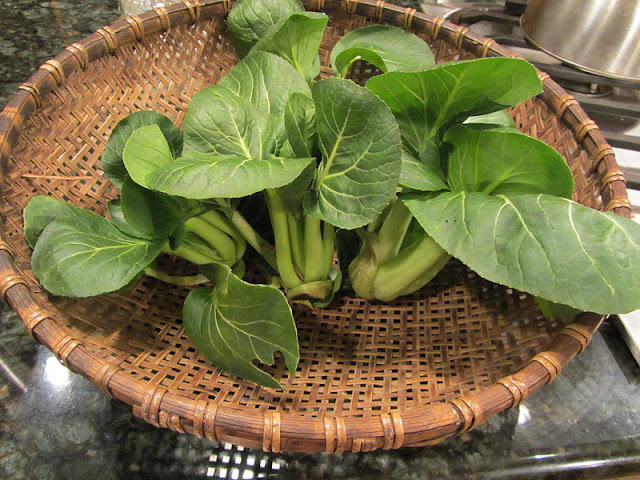 Sarah used the bok choy to make a Chinese noodle which were like dumplings when dropped into the boiling water.  It was a mixture of flour, water, egg, and diced bok choy. 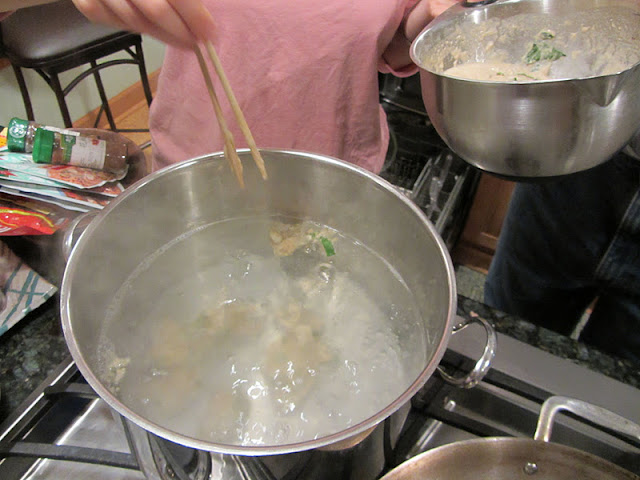 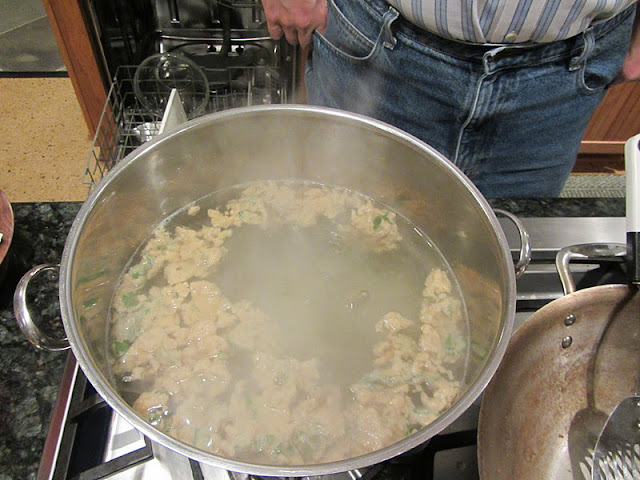 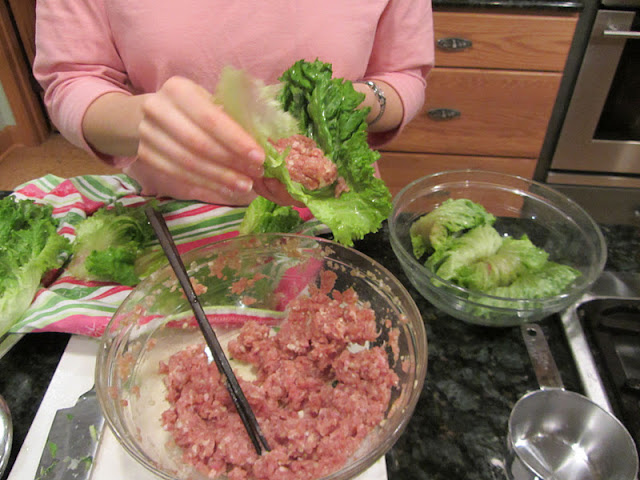 She also made a lettuce dumpling: ground pork seasoned with ginger, garlic and other secret ingredients then placed into a lettuce leaf.  These were steamed. 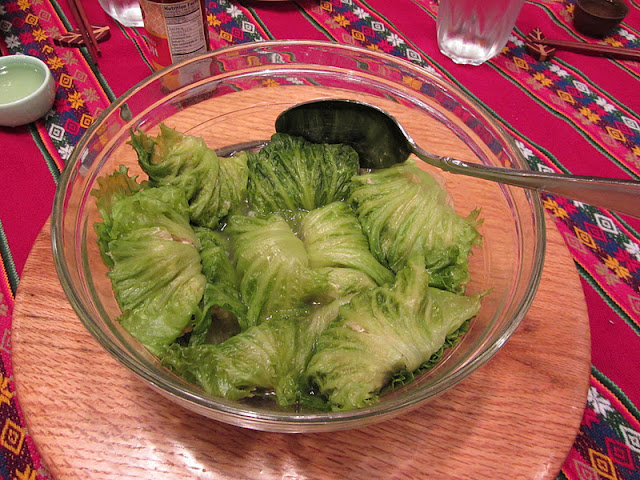 The noodles were served with stir fried carrots and broccoli and drizzled with a hot oil mixture. 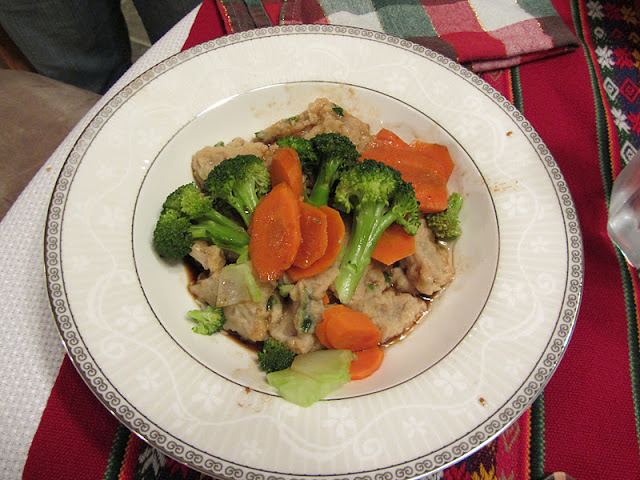 Every last bit was devoured!  A delicious way to ring in the new year.