It happened yesterday and I didn't lift any of it.  8 Cubic yards were delivered on Thursday afternoon from a local supplier and Bill, a handyman extraordinare, came Friday morning and spent less than 6 hours spreading it all.  It would have taken me weeks and weeks.  It was well worth the money spent. And plus it looks fabulous.

You know its spring when you step outside and smell the mulch!

Here's the west end and A's Garden is on the right.  Perennial Garden is in the foreground.  I have been busy expanding A's Garden and expanding the Glen Garden on the left by the fence. 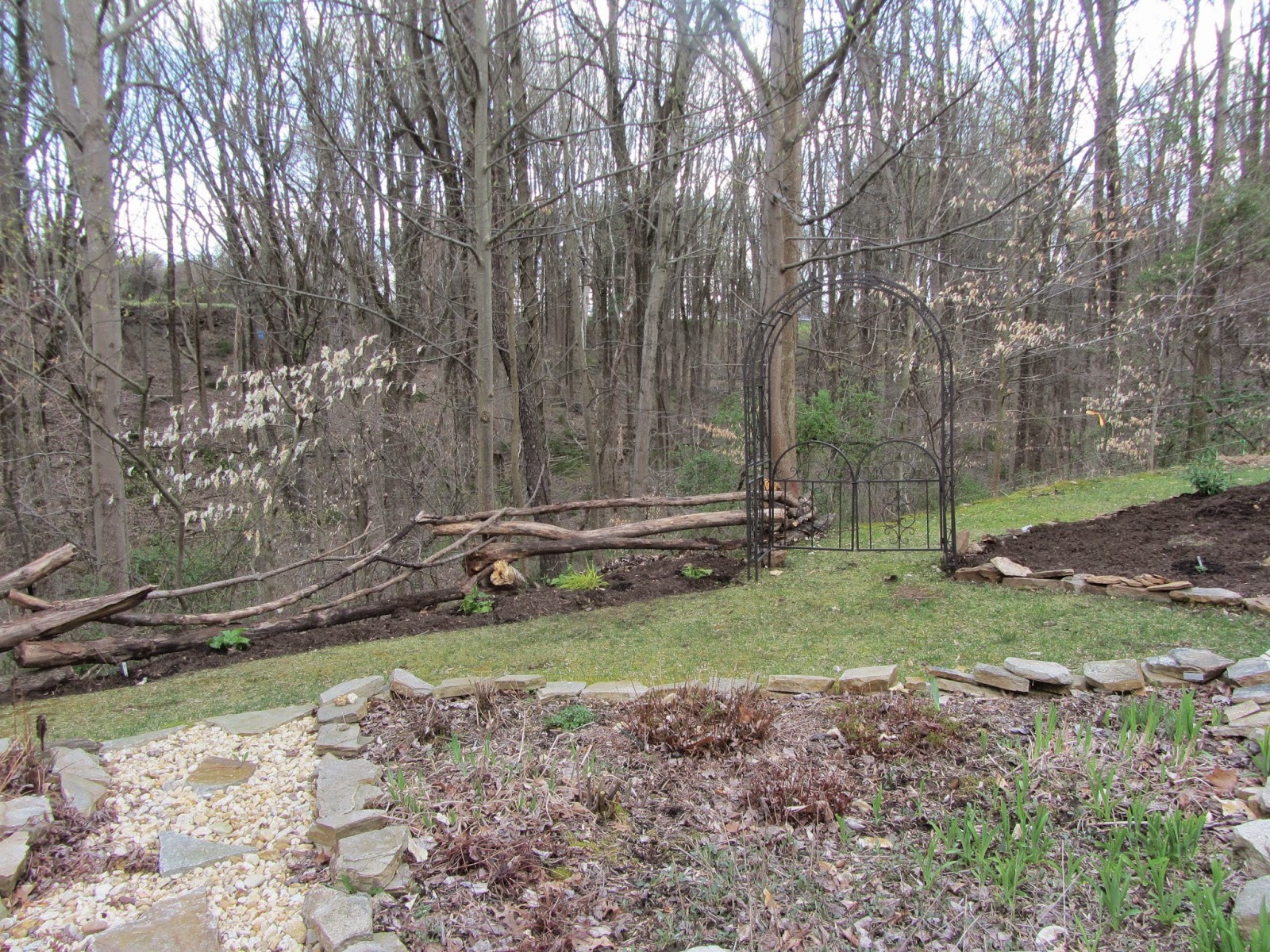 I bought and planted three new foxglove and this time I will not clip the spent blooms so they reseed. 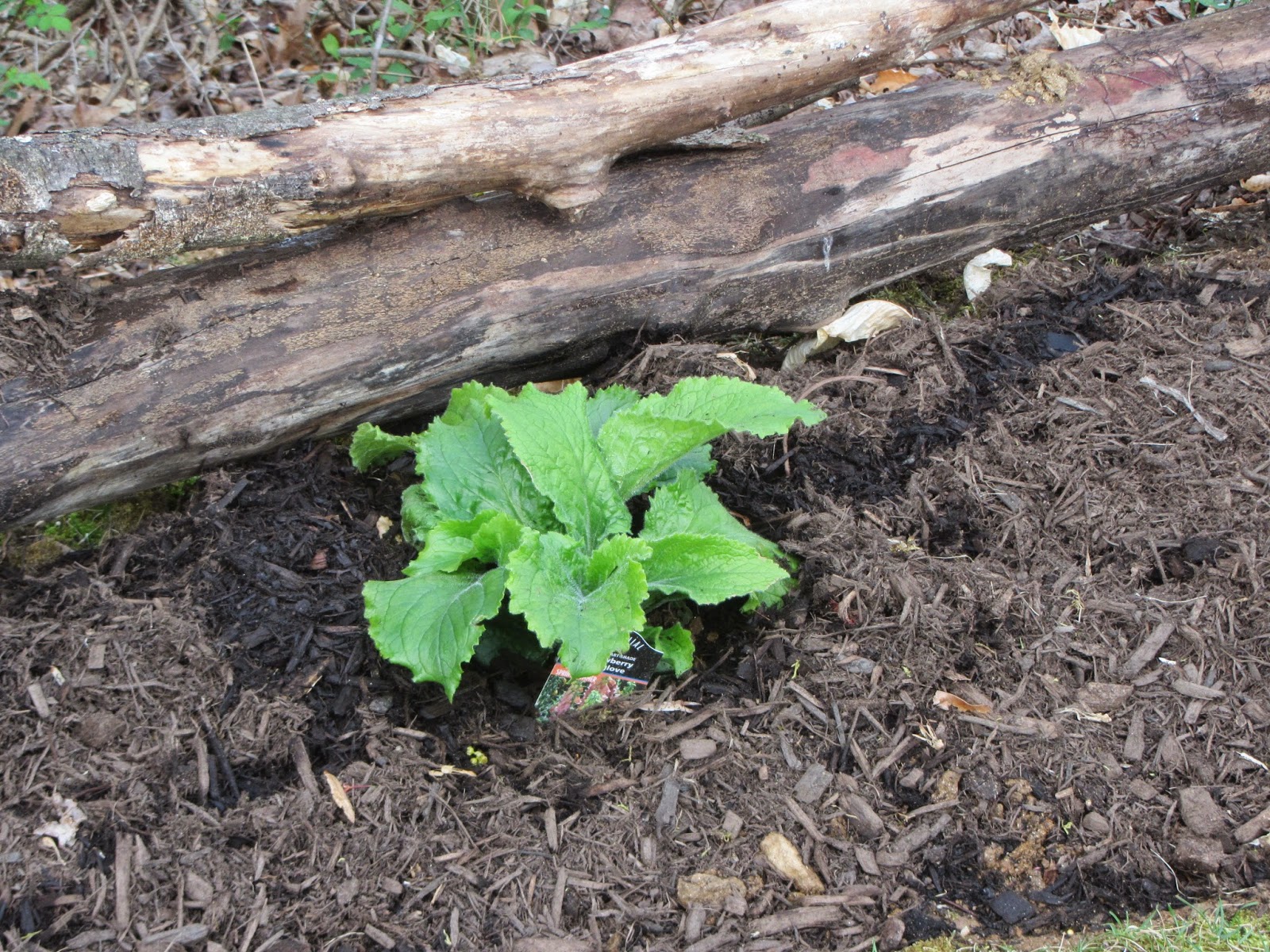 I planted three new ferns there with a lovely bright green type of grass whose name escapes me in the center.  I've also been transplanting lots of volunteer bleeding heart to the fence line in the Glen Garden.  The dark spots are from my watering.  It made a funny pattern in the mulch. 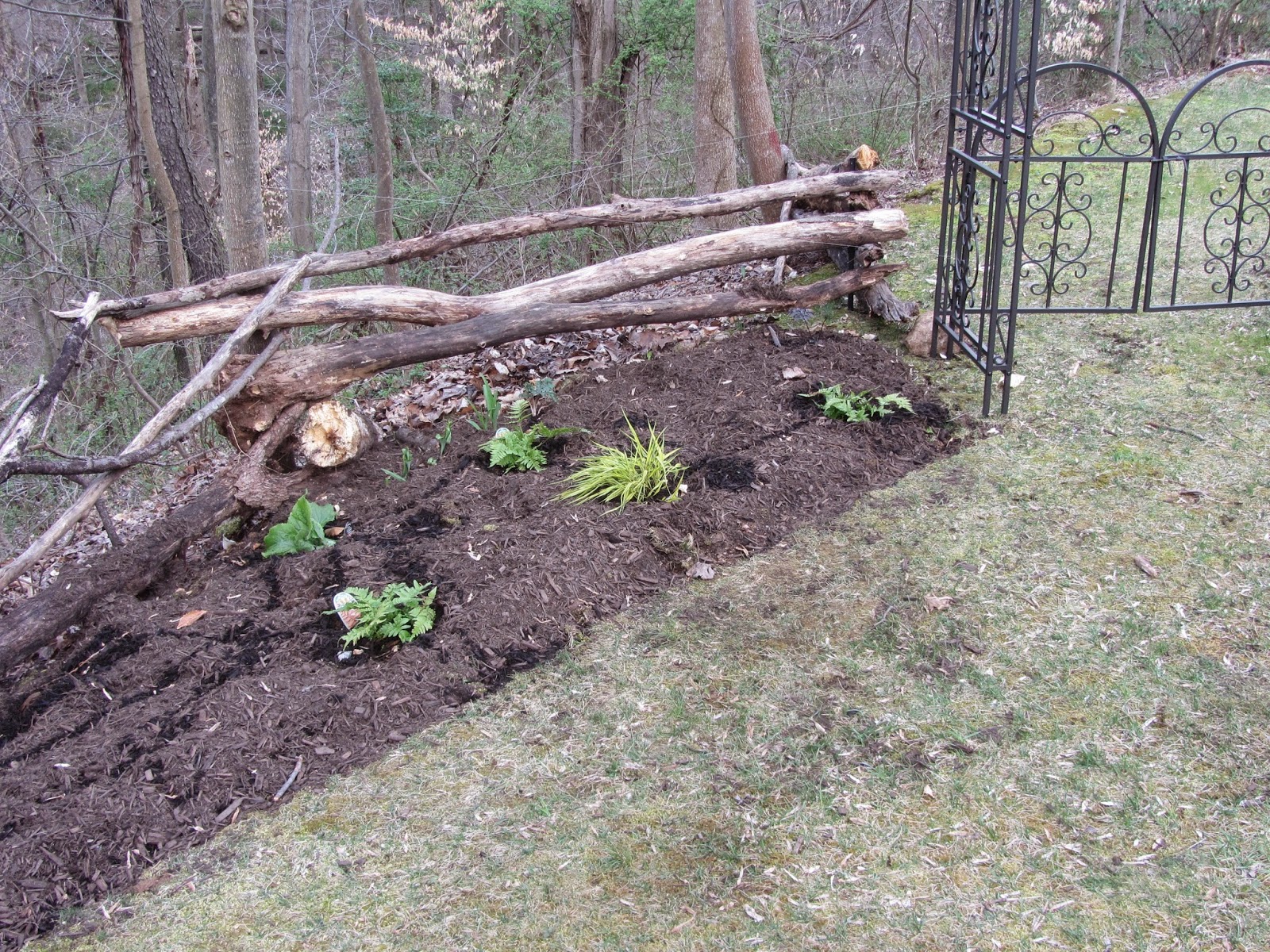 Another view of A's Garden the green on the left is a new white butterfly bush.  It will grow big and block some of the view in.  Part of the D.P.P. as is the arbor with gate.  There is fishing line now between the stone wall and the arbor. 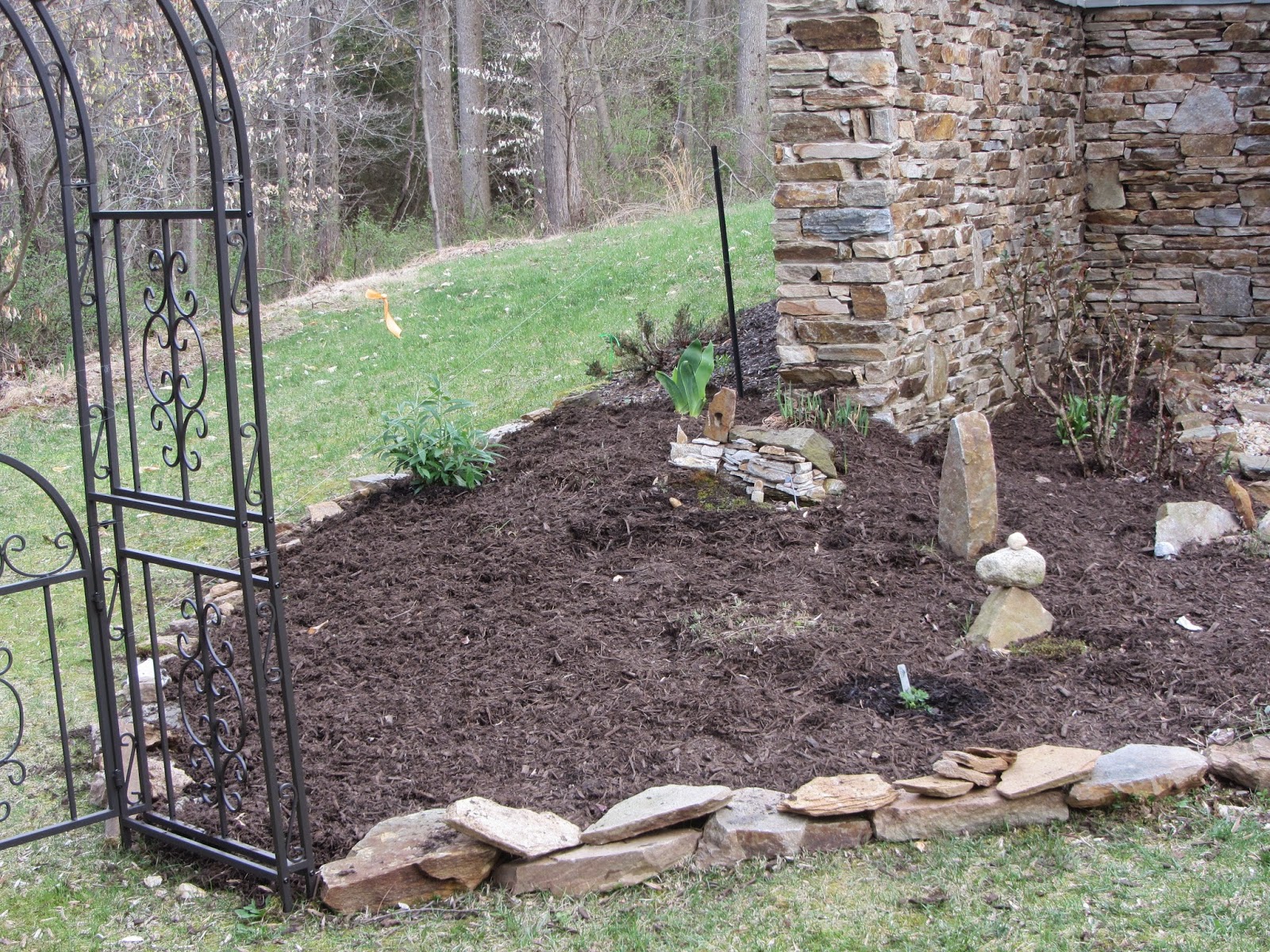 Here's a look at the fence line in the Glen Garden with the mulched bed. 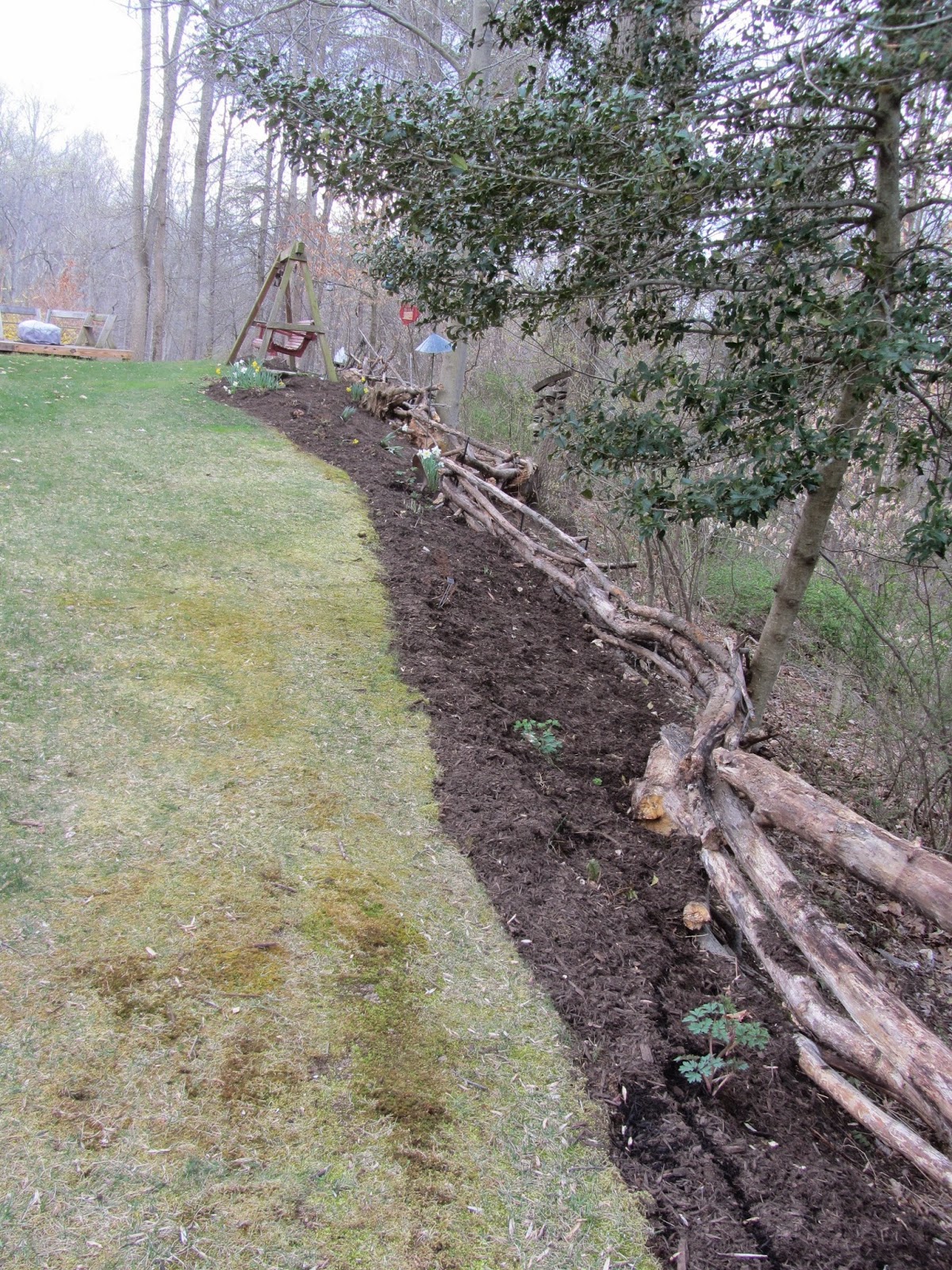 I was taking these photos in early evening so these blooms have already closed up. 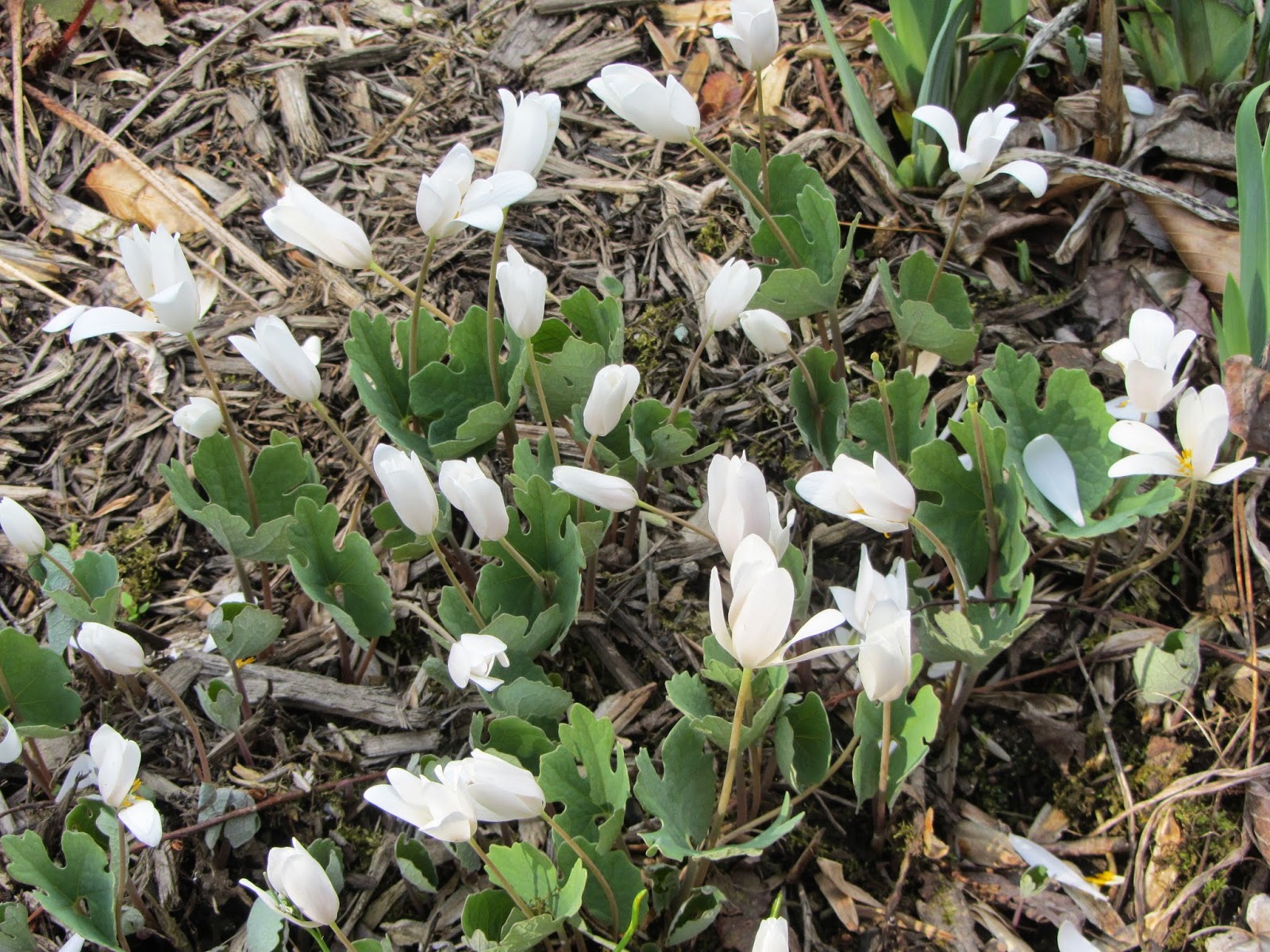 It's hard to mulch around daffodils but these survived. 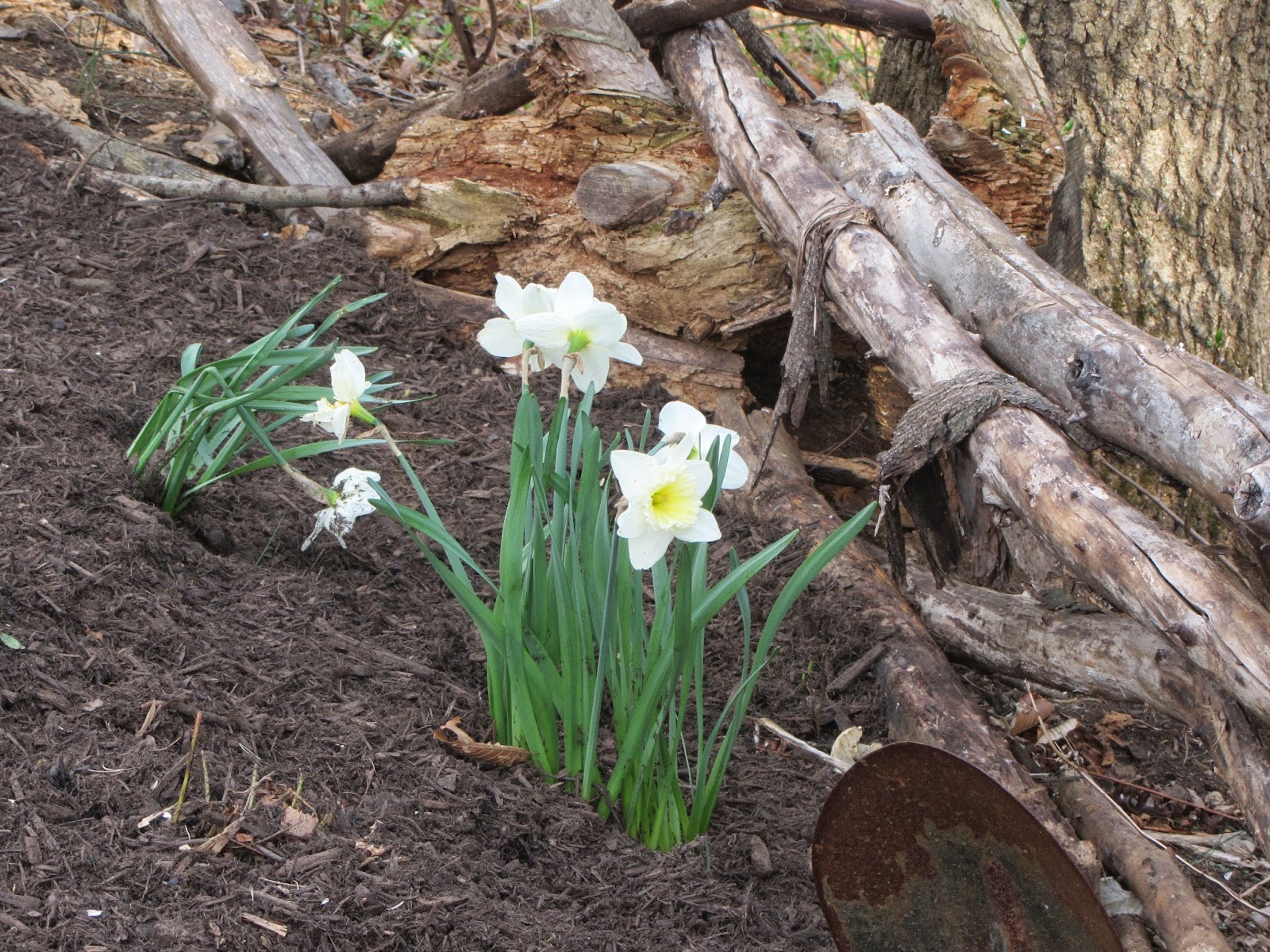 One of the transplanted bleeding heart with blooms setting. 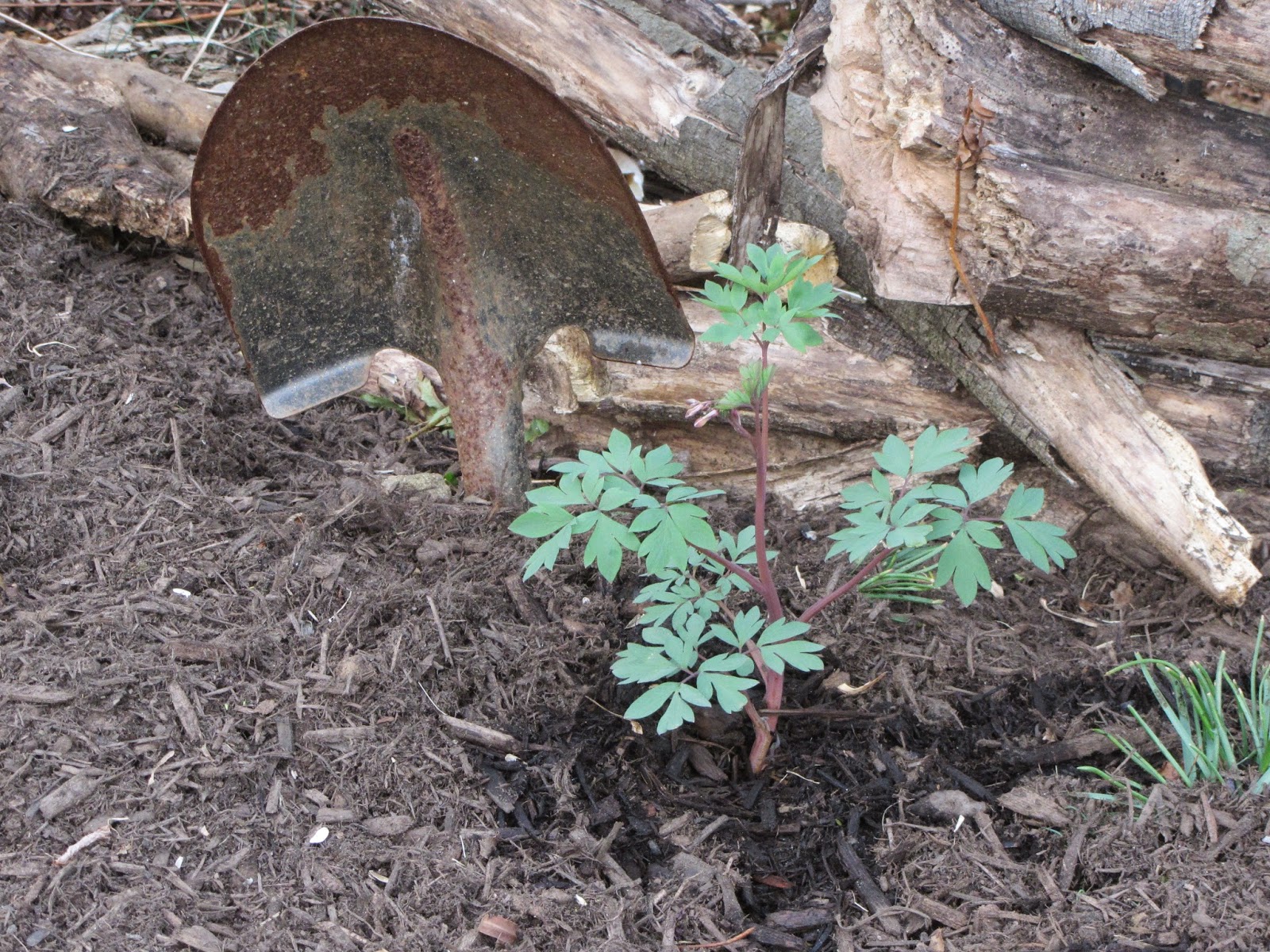 Farther down the Glen Garden the hosta poking through the mulch.  Liquid Fence spraying weekly will be required as the grow. 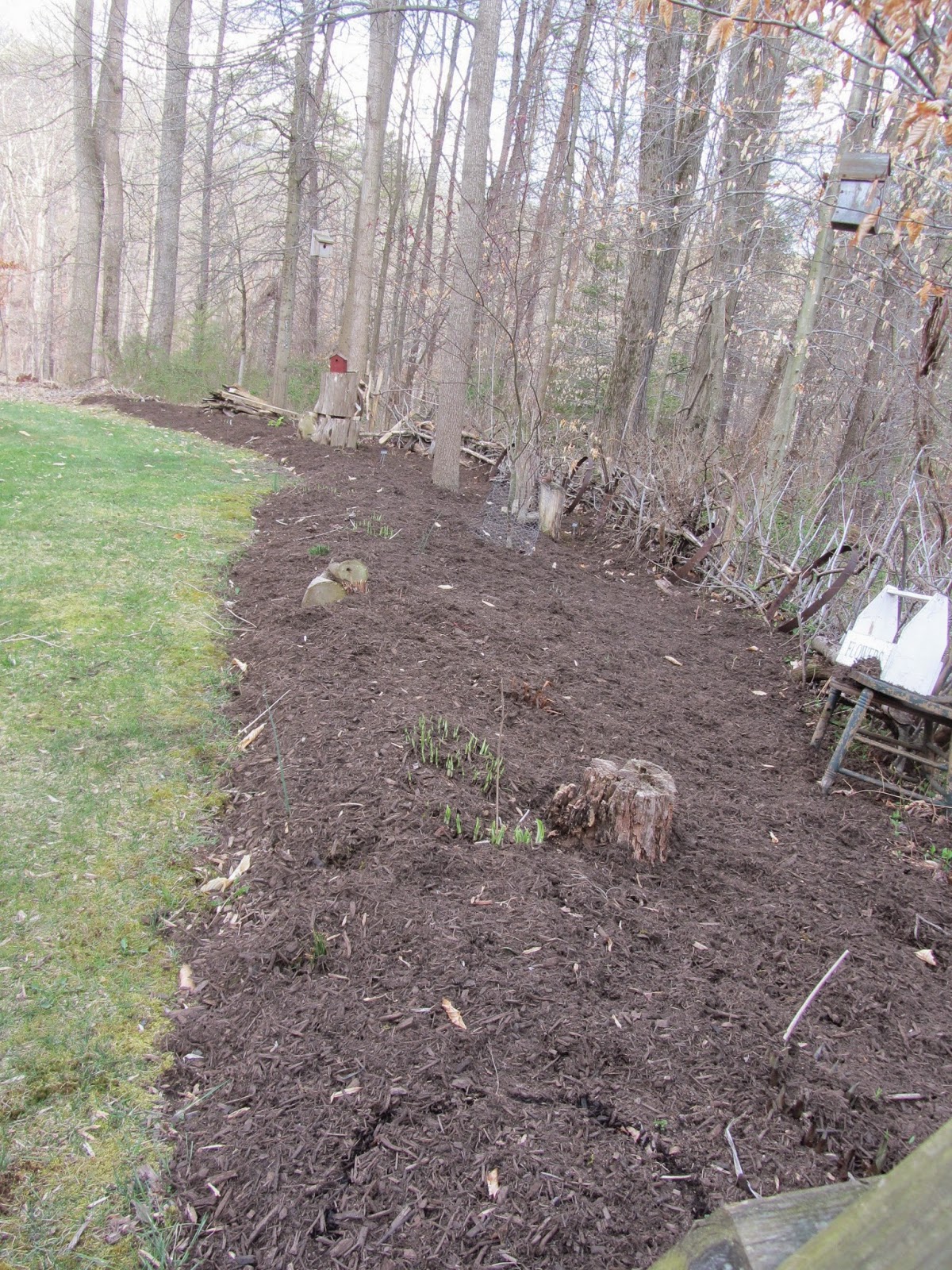 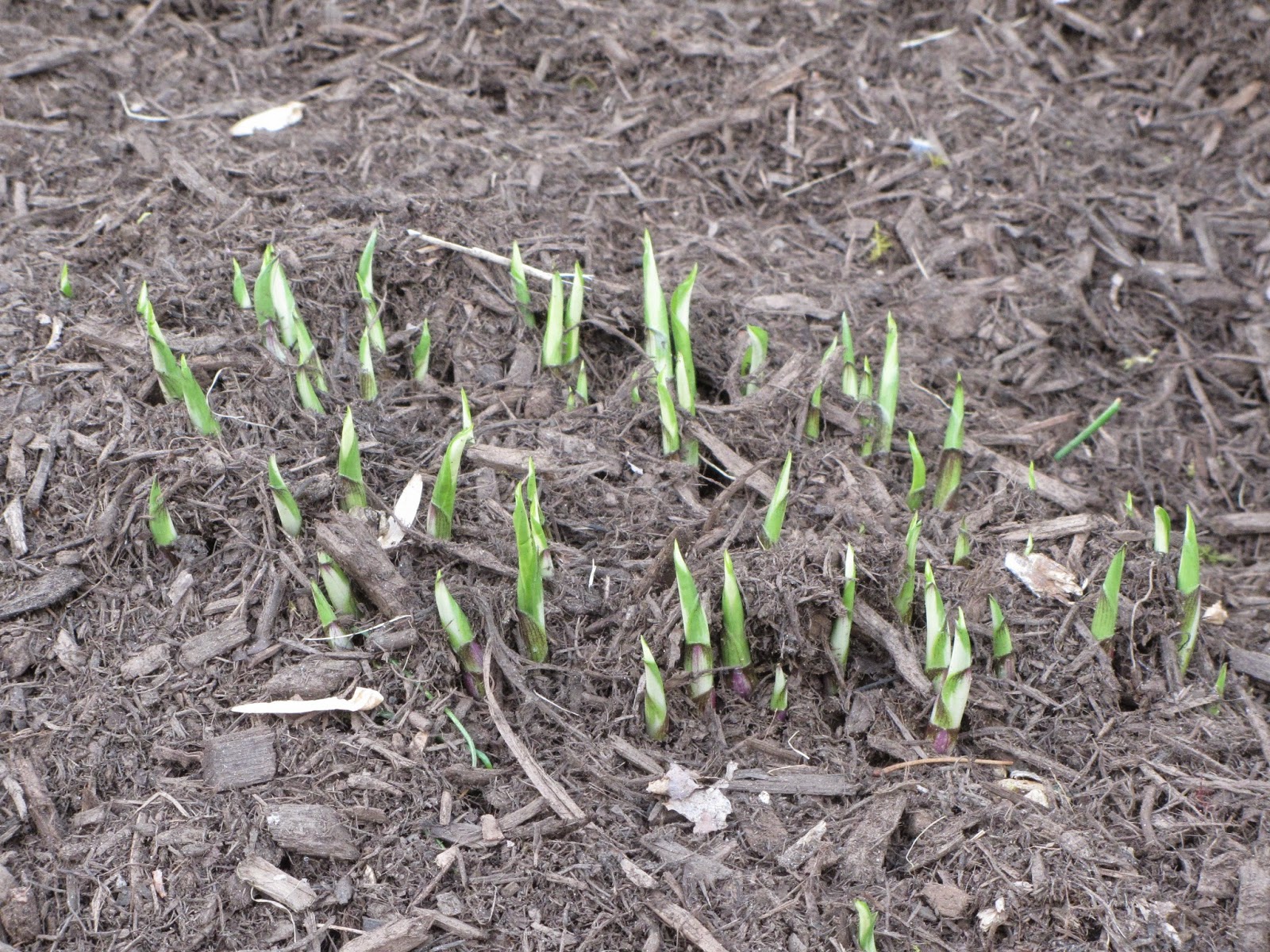 The Pond Garden, half in light and half in shade, ringed with iris and full of tadpoles. 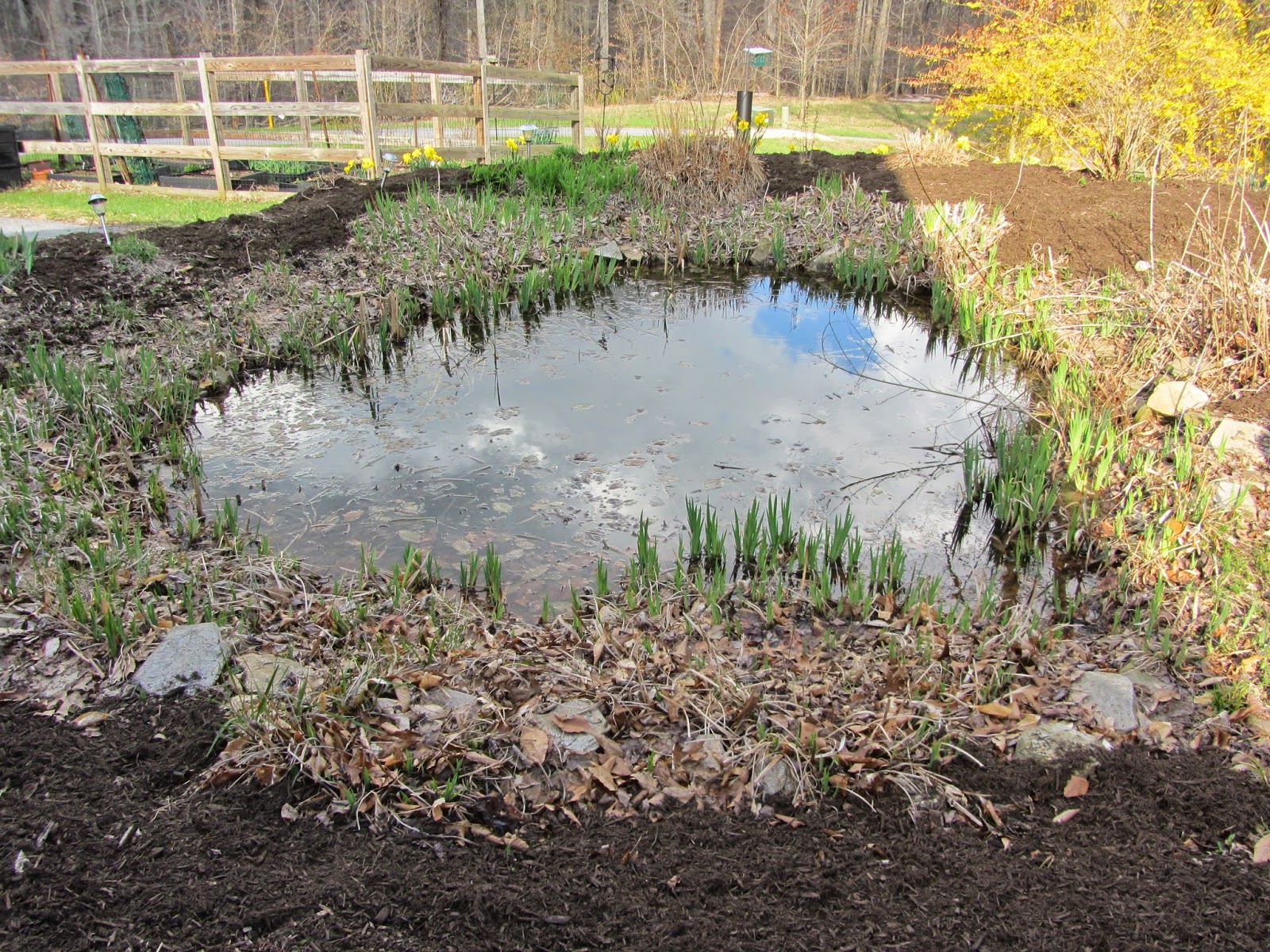 The D.P.P. called for me to dig up these hosta.  Well, I tried unsuccessfully so I planted the red hot poker plants to the left (not in this photo).  I'm just going to have to keep these sprayed as I have in the past successfully. 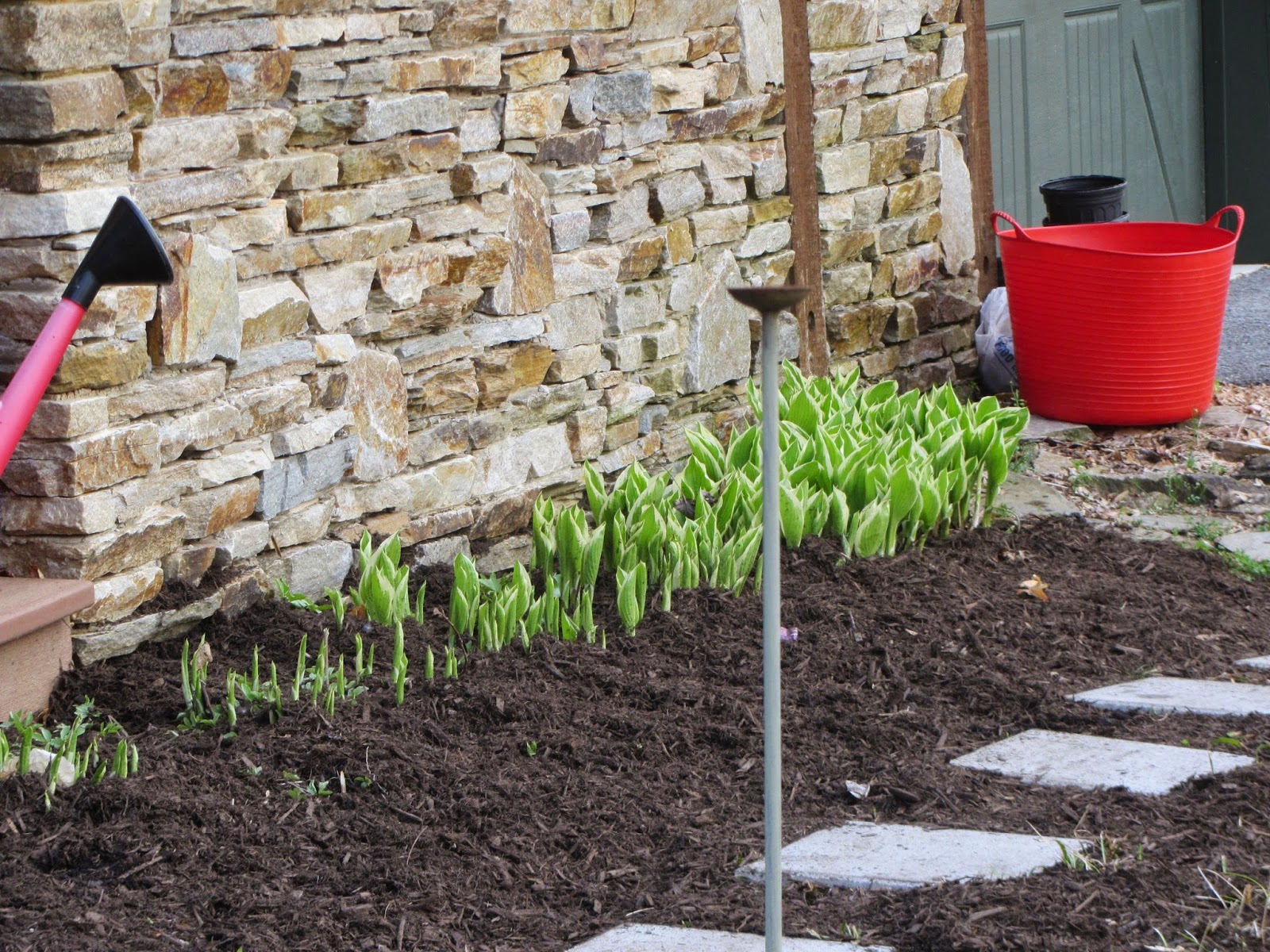 There wasn't enough mulch to do the Perennial Garden which is just as well since as things come up I need to thin and transplant.  The herb bed, front right, needs a total overhaul, too.  I saw something on Pinterest where each herb is kept in a pot then buried to the brim in the soil.  I do that already with mint. 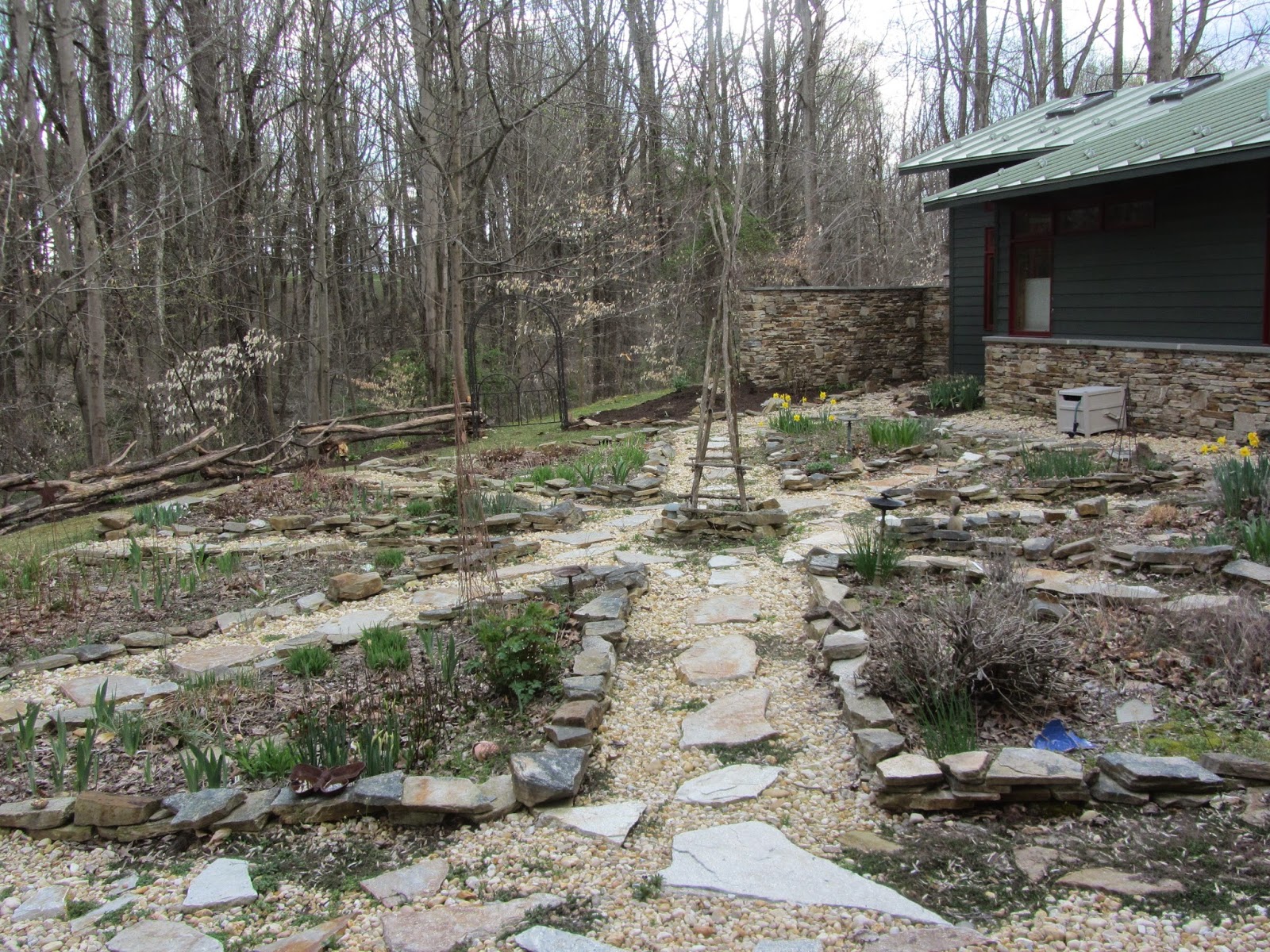 Inside, here are the tomato seedlings, doing well. Peppers still need to be transplanted to small pots. 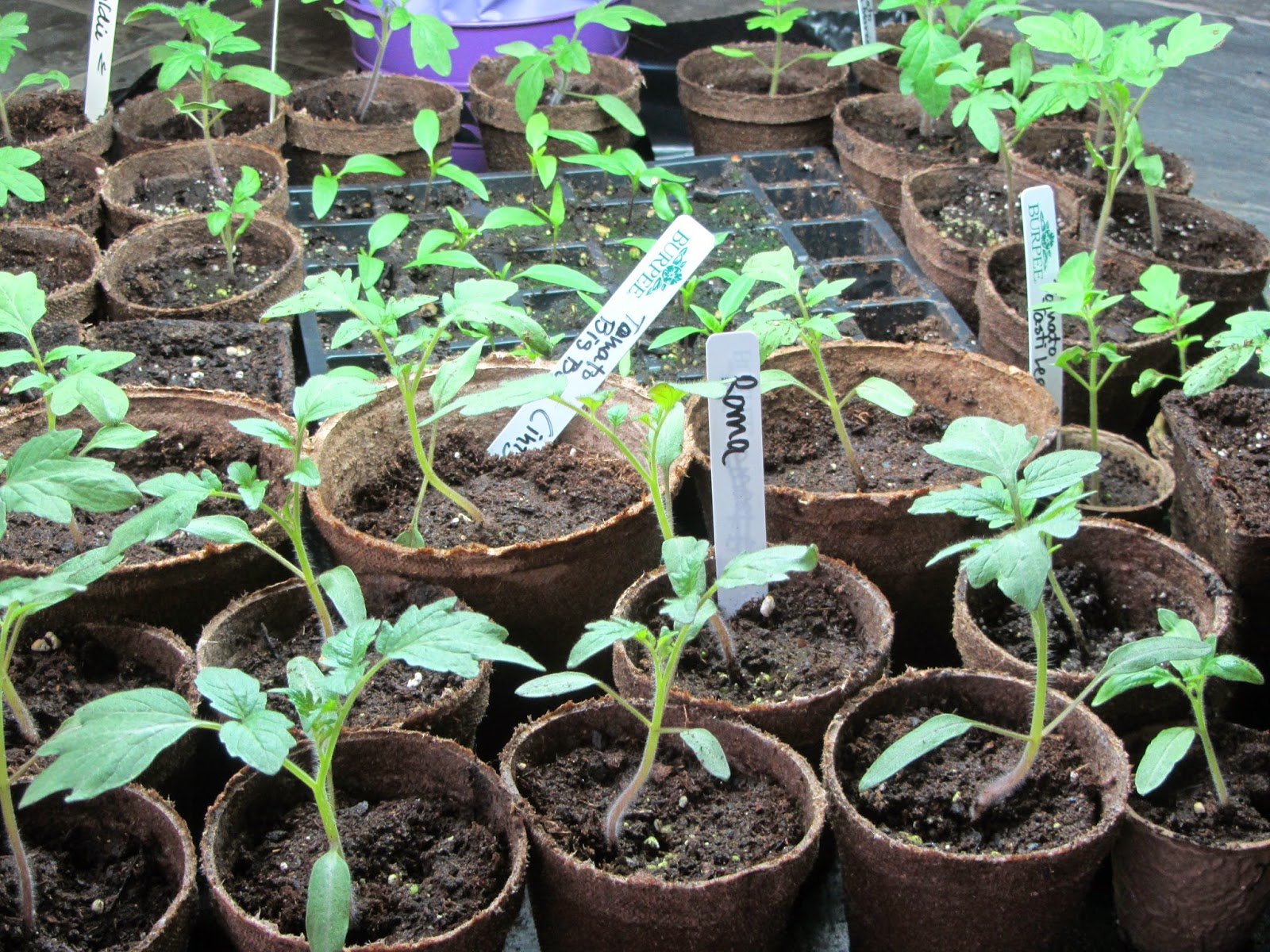 Email ThisBlogThis!Share to TwitterShare to FacebookShare to Pinterest
Labels: D.P.P.

Great idea... We still try to do it ourselves --and you are right. It does take WEEKS. Did you put any kind of plastic or something underneath the mulch to keep out the weeds? We buy a mulch with a weed protector in it --and it's supposed to work for several months. We did that last year --and it worked fairly well. SO--we'll do it again!!!!! Fun...

Tell me more about Foxglove. Mine has not come back this year (the one you gave me). BUT the Bleeding Hearts plant and the Hosta are FABULOUS...

Your Blood Root is so lovely. Tom The Backroads Traveller