Actually that title for this post is not correct.  There is the common factor of silverware to these two stories that came to mind as I was polishing silverware on a Monday morning this week. 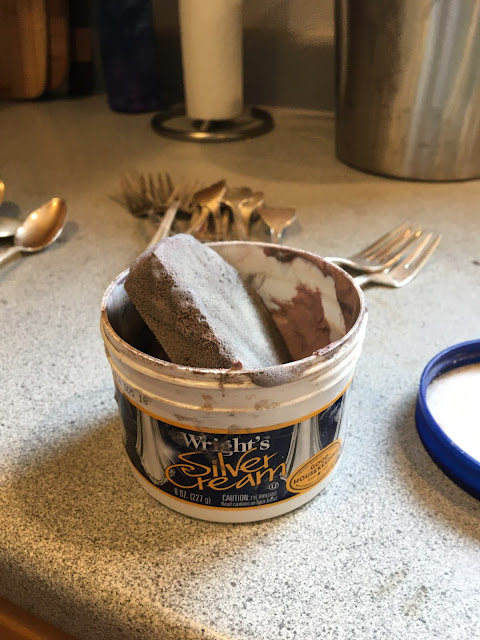 I didn't use to have to polish so often, but with the new dishwasher and our water which has been softened, the silverware developed such tarnish so fast. 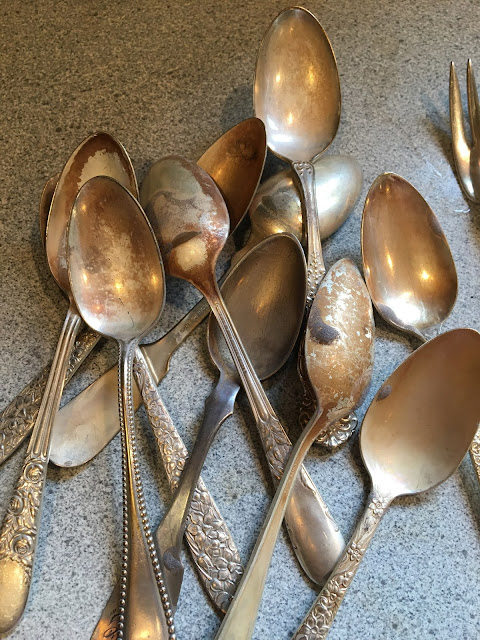 Dan suggested we give up on the silver and get some nice stainless which I did with a 30% off at Kohl's last week.  When we lived at the house we built which we refer to as The Lodge, we used stainless all the time and saved the silver for entertaining.  Now understand my silverware is not sterling but only plate. When we downsized to move to the retirement community, I gave the stainless to daughter Sarah and figured I'd use the silverware for everyday. That worked fine and polishing was not very often because dinners were in the community dining room. 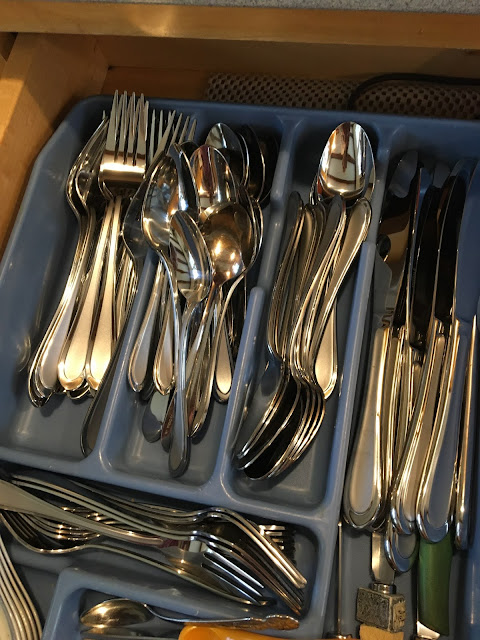 Where did the silverware come from?  That's the first story. 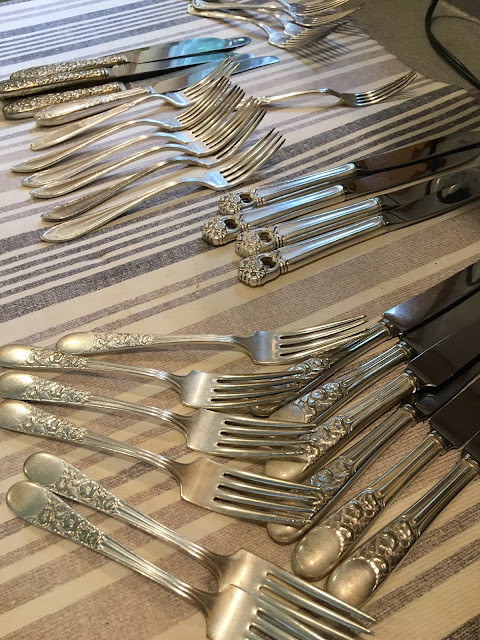 Before we were married Dan sold real estate while he freelanced as a musician. One of the houses he sold had belonged to a woman who died in her home.  Her heirs took out what they wanted and offered the contents for sale.  Dan's offer of $300 was excepted and he ended up with all the furniture and stuff from living room, dining room, kitchen and bedrooms. 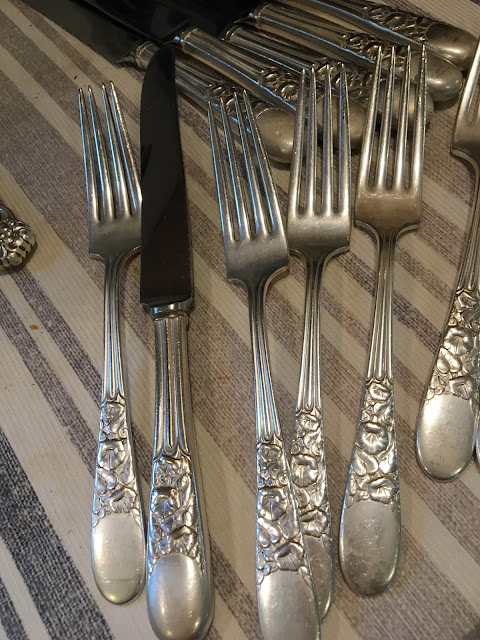 The above silverware, service for 6 was included. Much of the stuff we sold once we moved from our apartment in Alexandria to our first house in Columbia, MD. But there was much we kept and always referred to it as Mrs. Kennedy's as in Mrs. Kennedy's silverware. (I still use her flour and sugar containers.) 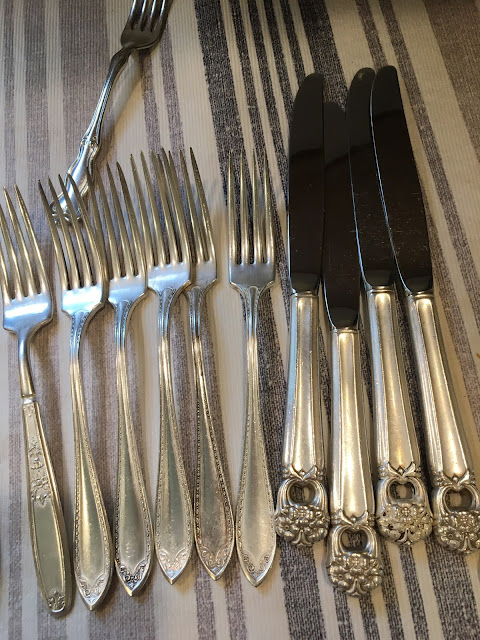 When we moved to The Lodge I frequented antique stores to furnish the house.  I supplemented Mrs. Kennedy's silverware by purchasing bundles of knives, forks, etc. Of course none of it matched but I liked that look. 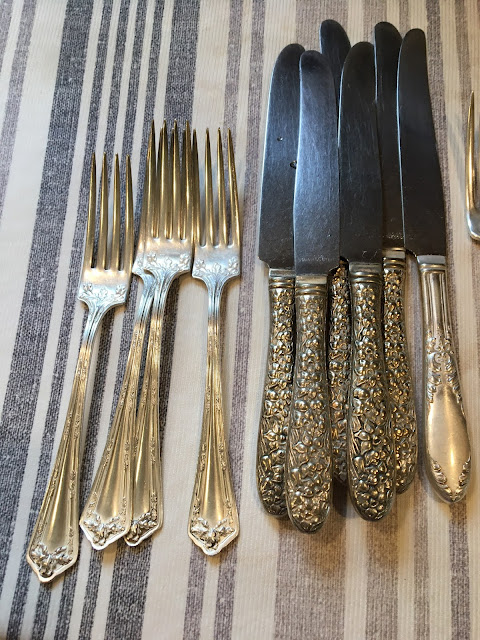 In polishing today in preparation for putting away the silverware I discovered we are short 4 spoons from Mrs. Kennedy's set.  Not sure how that happened.  Mistakenly thrown in the trash maybe? 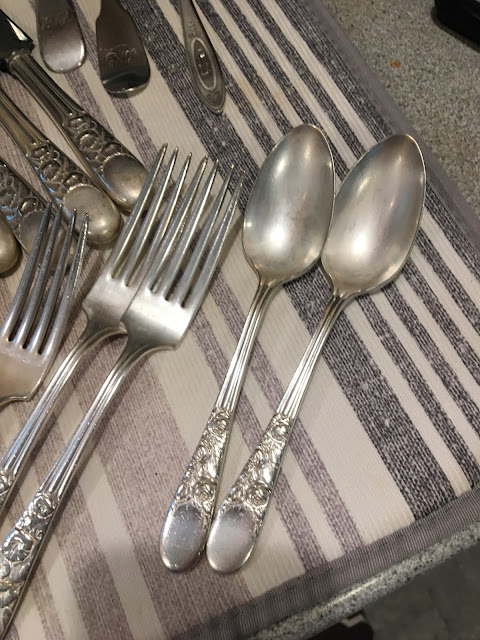 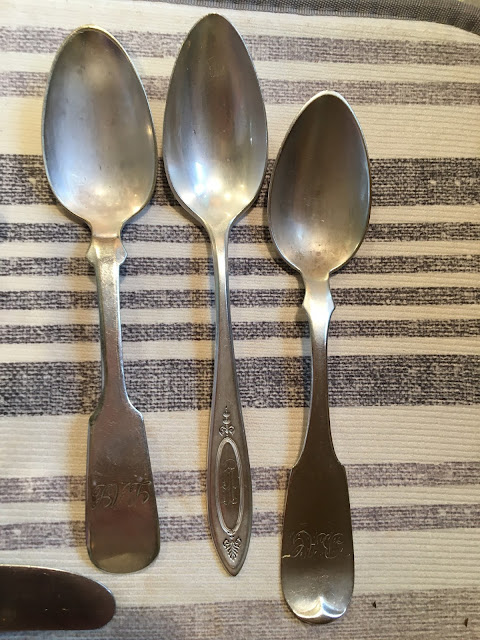 This brings me to the second story that involves these three spoons. They once belonged to my Aunt Gladys.  She was one of my Dad's 5 sisters and the only one of the two oldest I ever knew. Aunt Beulah who was older was a missionary to Africa (not sure which country). She contracted a tropical disease, maybe malaria, and if she could have been transported home would have survived.  But this was during WWII and the Nazi U boats were sinking ships so she had no chance of returning home and died there.
My Aunt Gladys was also very active in the church and was referred to as Rev. Gladys ***.  She co-pastored a church with Aunt Dot who was no relation but since they lived together she was like an aunt too.  When Aunt Gladys died these spoons came to me from her. The middle one has a B for her last name and the others have initials.
From the 21st century looking back at Aunt Gladys and Aunt Dot I can't help wondering what we would now call their relationship.  It's something I never discussed with my Dad who was very liberal.  My aunts were not but they did love each other.
Posted by Marcia at 5:00:00 AM

I hope you’ve not been putting that silver in the dishwasher...!

I am brilliant at losing teaspoons! Most of my cutlery what you call silverware) matches but my teaspoons are a hotchpotch because I'm always having to buy more.

When I was growing up there were lots of elderly women who lived together, partly perhaps because so many had lost their sweethearts in WWI and there simply were not enough men to go around. Nothing could be more natural.

Enjoyed both stories about the silverware, Marcia. We use stainless steel pieces for everyday, but I inherited my late mother's silverware and have considered using it for everyday, but know it would not do well in the dishwasher. And, we also have a set of gold plated silverware, a gift from my late mother. Now all we need is to host a large gathering as we certainly have all the knives, spoons and forks to go around.

I have come across relationship such as those.

Very interesting. Beautiful silverware, but I am not patient enough to polish them. Thanks for sharing.