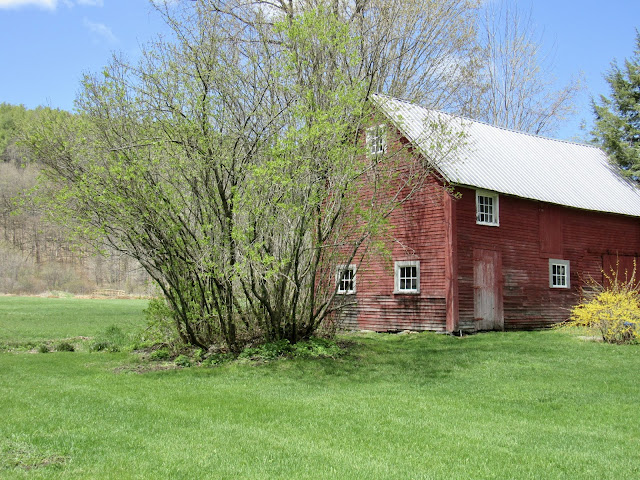 I know I've mentioned that we plan to convert part of the barn to a garage with a cement floor.  From the outside it will retain the barn look with a sliding barn door.  What I haven't mentioned is the difficulty Dan has had to get someone to do this work. 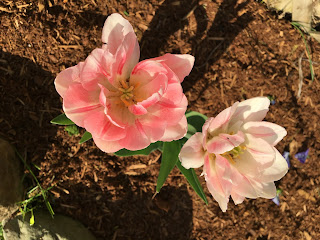 The first person he contracted with to replace temporary floor supports in the basement was gung ho to tackle the barn. He even wrote a nice email back to Dan to thank us for the quick payment for the basement work and to ask if we wanted an automatic garage door opener.  Then he went silent.  Didn't respond to emails - nothing.

The second person Dan spoke with about the barn is a local handyman our neighbor has used.  Dan got him to replace a window in the eaves with a door so should we need to access that attic space (no access inside the house) we had the door.  He did the work just fine so Dan had him walk through the barn which the guy who was of few words, said he could do.  He said he'd get back to Dan with a proposal.  Nothing.  Dan left a long voicemail that was never returned.  We've seen the guy since and he says hi but nothing about the barn. 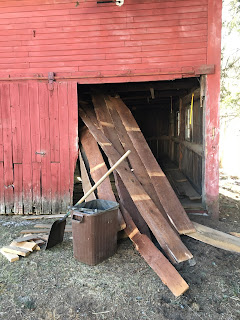 On to a third person - this time someone who was recommended by the previous owner.  He in fact was responsible for replacing the bulkhead just as we bought the house.  He came over and showed Dan where his initials were in the concrete in the basement along with previous owners so had worked on the renovation of that space.  He was so excited to work on the barn and gave an indication that he would start fairly soon so that's why Dan dismantled the loft and the ground flooring in early March so the guy could see the foundation.  The guy brought over a grading contractor to look at the driveway slope.  He brought over someone else to look at the foundation with him.  While we were in Buffalo in early April he had beams and hardware delivered to the barn.  The day after we returned from Buffalo he met with the cement contractor we'd used to pave the basement floor. They discussed the cement for the barn. They guy prepared a plan for the first phase.

We waited and waited from early April.  Dan sent emails to check with him.  His response he'd be here soon.  A couple more weeks - he'd be here pretty soon.  He'd be here the next week. Still no show. Monday Dan called him and he'd probably be here this week.  He would call before he comes. 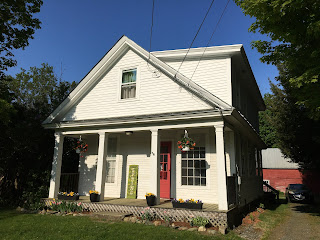 It's Thursday at 10 am when I'm writing this.  He's next door cleaning up the tree that came down at our neighbor's.  She told Dan last week that the guy would take care of it for her when he was here working on our barn.

He has shown no interest in at least saying hello.  Made no eye contact with Dan who was out front working on the door latch.

Will he come over?

Postscript: 1:00 pm. I left at 10:45 to pick up granddaughter #2 and go pick up our CSA share.  Dan finally went over to talk with the guy as it looked like he was finishing up at the neighbors. He talked Dan's ear off for an hour - life story stuff.  He does plan to do the barn but no definite start date.  He will get to it.  Dan is satisfied for now.  He doesn't want to have to look for a fourth contractor.

I have heard similar stories around here of contractors backing out, sometimes when there is an urgent deadline.

It takes persistence, doesn’t it! We have the same situation with most everyone we hire to do things here. Initial enthusiasm ... followed by ... silence. We thought it was a problem with the South but maybe it’s more widespread. We waited for the damper in our chimney for 18 months. Paul finally started watching YouTube videos and found one on the internet that he could install himself! Good luck with your barn floor.

You're in a different country to me, but the story sounds depressingly familiar. I hope the work gets done soon.

This made me think of James Thurber's story S Friend of the Earth --about a New England handyman/rural wit. If you subscribe to The New Yorker, you can read it here. https://www.newyorker.com/magazine/1949/06/04/a-friend-of-the-earth?irclickid=zhCWtRW9gxyLWiCwUx0Mo372UkB2-22yyWrU0Q0&irgwc=1&source=affiliate_impactpmx_12f6tote_desktop_Bing%20Rebates%20by%20Microsoft&utm_source=impact-affiliate&utm_medium=2003851&utm_campaign=impact&utm_content=Logo&utm_brand=tnyis

Your predicament on finding contractors was similar to what we experienced on the VA eastern shore. We called and left messages (some never returned) for several, set up appointments that were never kept (not by us). The reasons for many no shows were similar to shat Tom described above in his comment and similar to Cynthia’s. We did finally find a contractor and had the addition and renovations completed. Years later, it was just as difficult to find dependable maintenance/repair services and thankfully my husband has enough skills to have completed many tasks on his own. Hope the last guy you mentioned does follow through on the barn project.

That is a difficult situation. Wishing you luck.

It would seem that some people are not short of work! Strange story.

We had the opposite here, were called a plumber for a tiny job and he was hear in lass than 30 minutes!

Fingers crossed for you. I've heard it's hard to get work done during the pandemic.