Mouse in the Tub! And Other Critter Issues!

It's that time of year when the mice think they need to come into my house.  I've caught a couple in traps in the garage - the major entry point.  Then earlier this week I thought I heard one gnawing behind a small rolltop desk I have in the pantry/mudroom/laundry room.  I pulled the desk out from the wall and no mouse, but the sound continued.  Later as I ate dinner I heard it again in the same wall but from the great room side. It sounded as though it was trying to gnaw into my built in buffet. The next day the sound had stopped.  Checked the traps, no mouse caught.

Fast forward to this morning as I dressed in the bathroom, something caught my eye.  A mouse in the tub.  Now our master bath tub is huge.  Made to fit my 6'3" husband.  When the house was built, the tub had to be lowered in by a crane before any walls could go up.  The tub is poured concrete.

Somehow a very small mouse had found its way to the tub, fallen in and couldn't get back out.  The walls of the tub are too slippery. This has happened once before.  We don't know where they come from to fall into the tub. 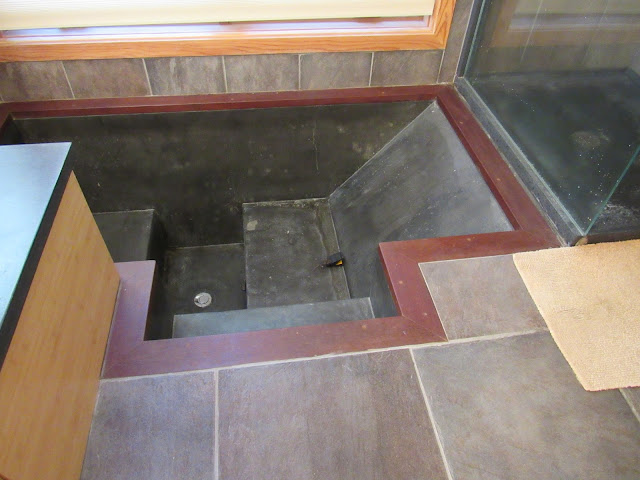 When I saw it I immediately went to get a trap, placed it in there, and with my camera ready thought I'd be recording its death.  Sounds macabre I know. Above you can see the trap placed in there and the mouse blends into the tub color. 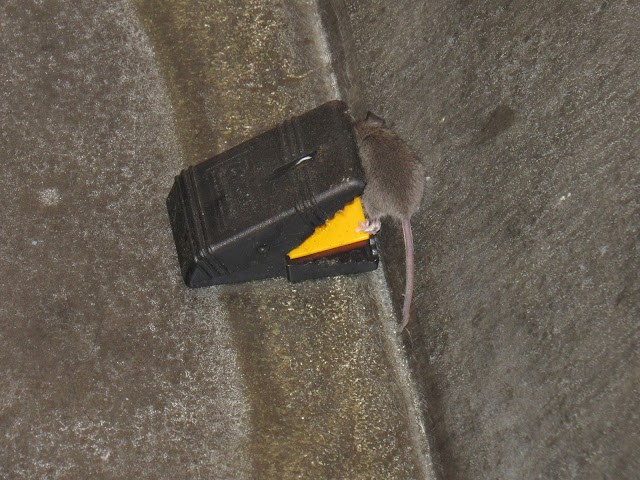 Well, now I know why the peanut butter disappears from these traps and they don't get sprung. 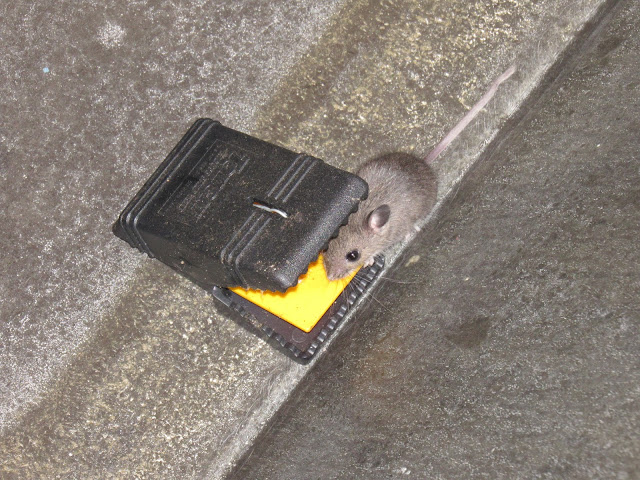 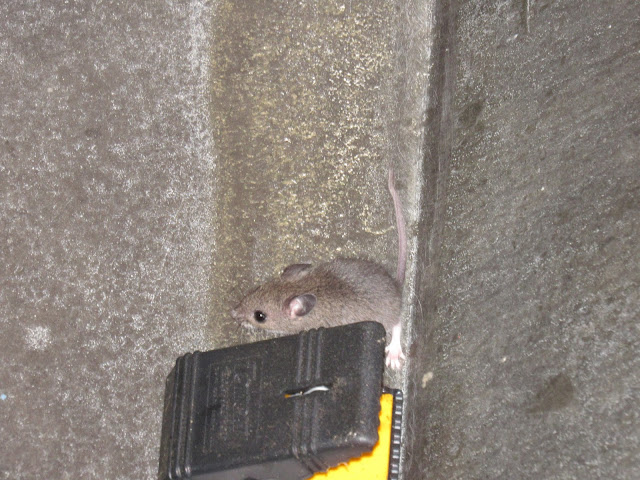 The mouse is so light it can eat the peanut butter.

I went for a glass and put that over the mouse on the trap then had second thoughts.

I tried to cover it with the glass without the trap but the mouse went down into the next level of the tub. As it cowered in a corner I put the glass over it catching its tail. 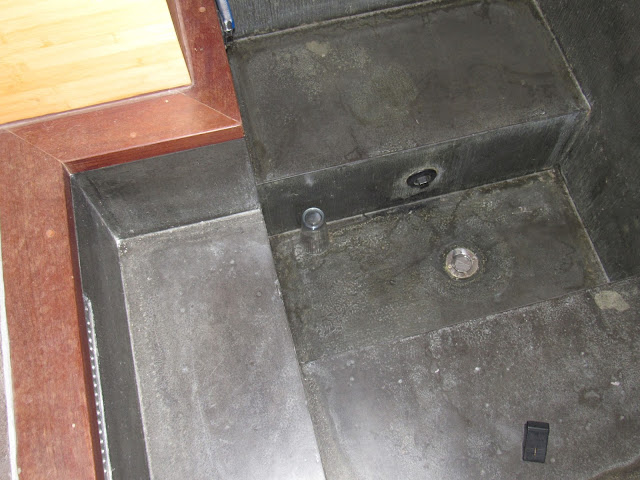 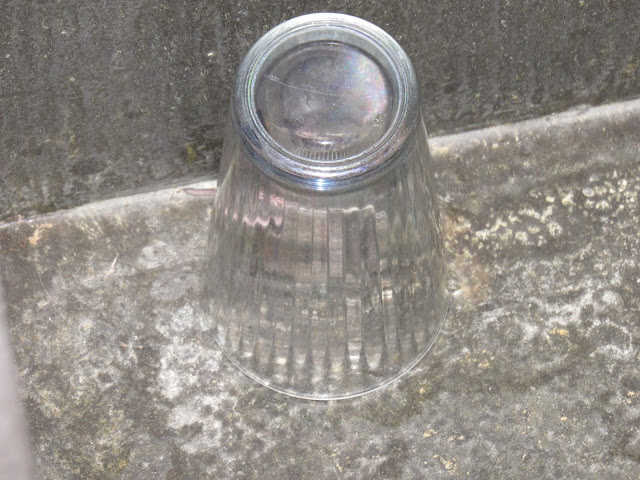 I had to decide at this point, would I leave it there for Dan to take care of tonight or get cardboard and capture it.  I opted for the latter. 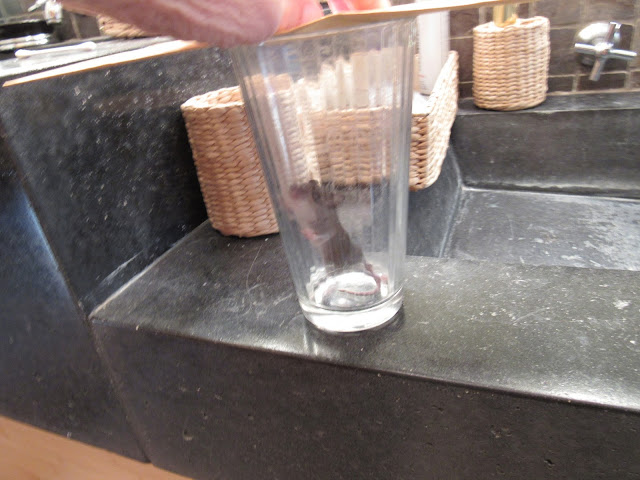 Here it sits on the counter.  Yes, these sinks are concrete too but they are being replaced next month.  Another story. 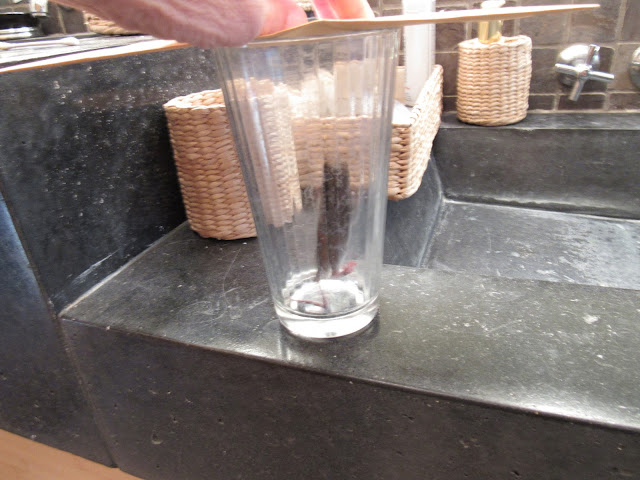 I took it out the door in Dan's study to the flower bed.  I hope it becomes owl or fox food.

Update: the mouse is back to gnawing in the wall behind the built in buffet.  I've purchased sound deterrents, sticky pads and new mouse traps.

And while I'm sharing our critter troubles, we came home from NH and discovered the back lawn had been ravaged. 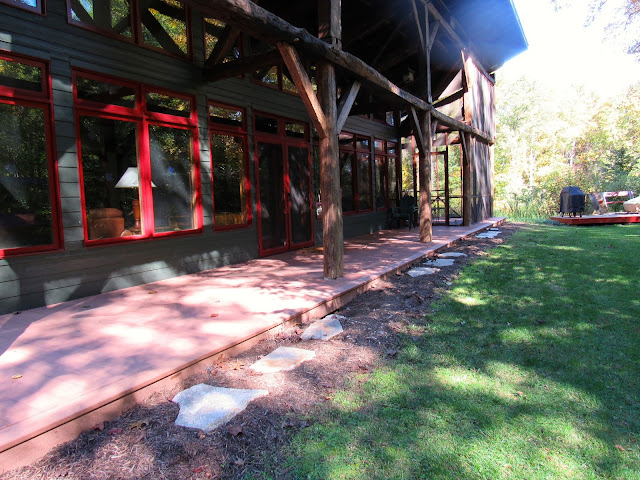 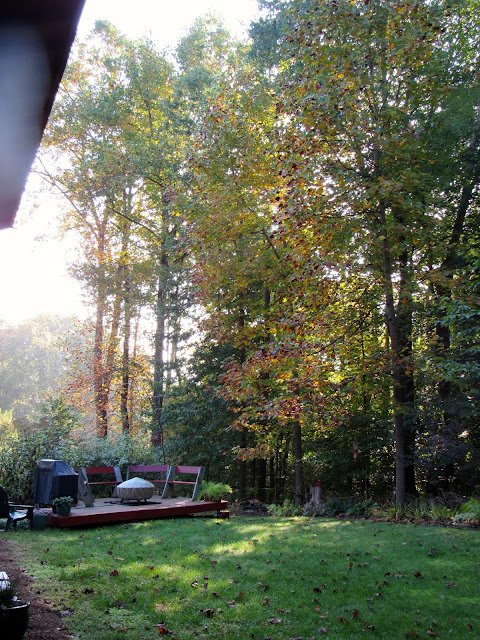 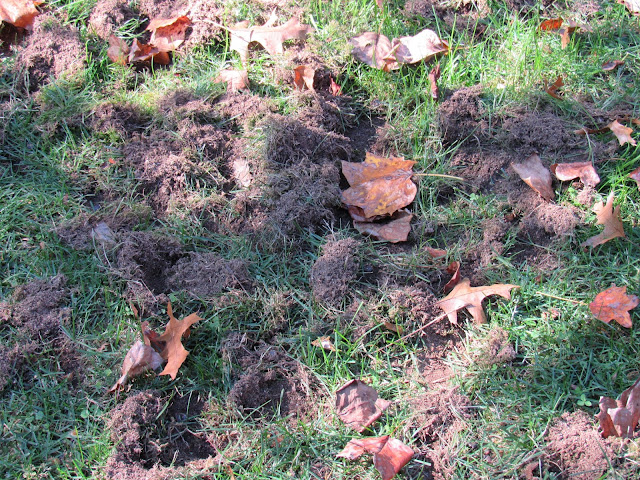 All through the lawn the grass has been pulled up. 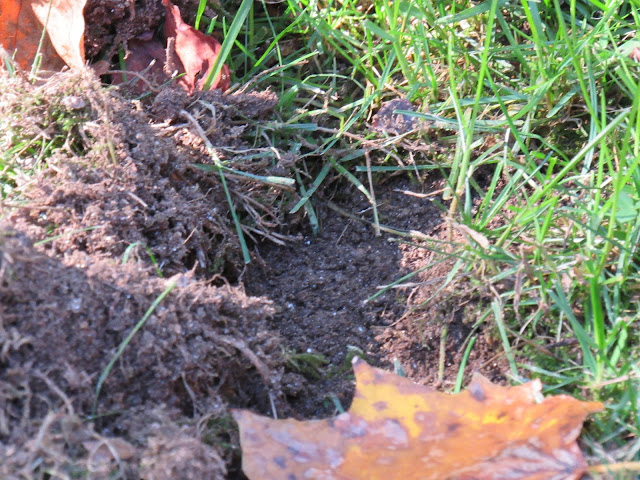 I think it was raccoons hunting for earth worms.
I'll need to rake and seed and hope for rain since the hoses are put away and the spigots shut off for winter. 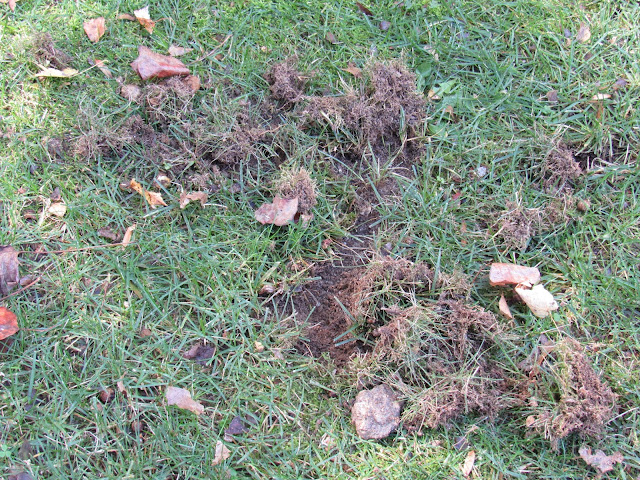 It's a never ending saga of me against the critters. After 10 years of this wouldn't you think they'd leave me alone?

Those long slashes are definitely made by a raccoon. I do hate my yard being torn up so!

Oh no, Marcia! All the creatures just love your home and garden! You were so brave with the mouse. Not sure what I would have done, but I know there would have been lots of screaming! Eeeek! So glad that mouse has been relocated. We are having a rainy, windy day here. Raking leaves will be on our list tomorrow! Have a good weekend! ♡Dawn@Petals.Paper.SimpletThymes

Yes, some hawk will thank you for the mouse. Unfortunately, I have a problem with raccoons digging around my garden, and they leave evidence a lot like your poor lawn..