Earlier this week I was tagged by HolleyGarden of Roses and Other Gardening Joys to participate in the Earth Day Reading Project hosted by Sage Butterfly. Here then are three books that inspired me to "Be Green".

"Crockett's Victory Garden" by James Underwood Crockett
When we moved into our single family home in Columbia, Md in 1979 I knew I would finally have space to garden both with vegetables and flowers. Though we had to get through some architectural covenants to place the vegetable garden on the side of the house, 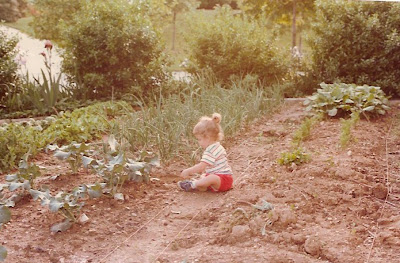 (Here's daughter, Emily, in the garden - no wonder she's a gardener now, too!)
we managed that and looked to this book for inspiration on how to proceed . I still have it and refer to it. Victory Gardens have come back into vogue in recent years but Crockett encouraged his readers to grow food and flowers - be green - in the 1970s when it was published.

"The Not So Big House: A Blueprint for the Way We Really Live" by Sarah Susanka
In 1999 we knew we wanted to build a home that would serve us well into retirement. We also knew we wanted to be environmentally friendly as we planned and built this house. We read a review of this book and found it so intriguing we purchased it. We even had an opportunity to hear the author speak at the National Building Museum. We were inspired to build a home that wasn't a mega mansion but one "that favors the quality of its space over the quantity". In 1999 we purchased 8 acres in the woods and went looking for a green architect and found one. We moved into this home in 2005 and feel very fortunate to be living in a home with so many "green" features. 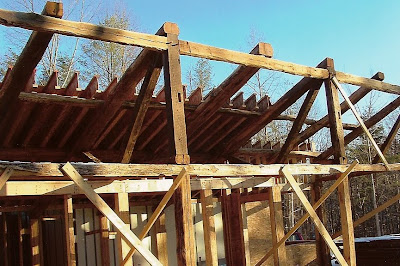 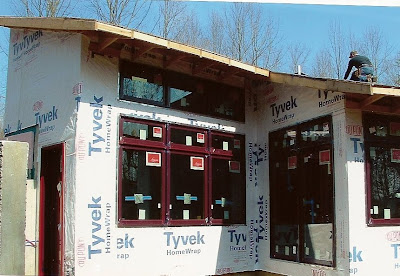 (Ecothermal panels and the Lowen windows.) 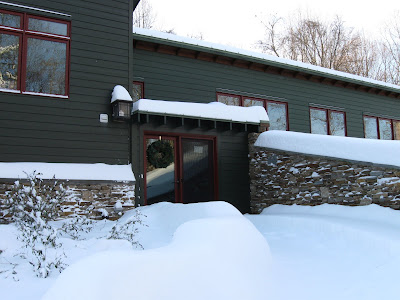 "Animal, Vegetable, Mineral - A Year of Food Life" by Barbara Kingsolver
My daughters recommended this book to me. There is no way I will ever duplicate the life this author describes but it did wake me up to try my hand at growing a vegetable garden again. My first attempts that first summer we moved here were a disaster because of the deer. I had no idea of the fight I would have to maintain a garden, vegetable or flower in the midst of the woods, where I was the trespasser into the habitat of the deer. I had thought I could intermingle tomato plants amongst my perennials. Nope, that didn't work. In the spring of 2009 I tried two raised beds with netting over them and that worked, but the beds were too small. 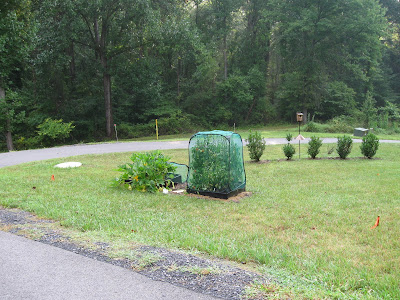 To expand would require a fence which we had built around the raised bed area. 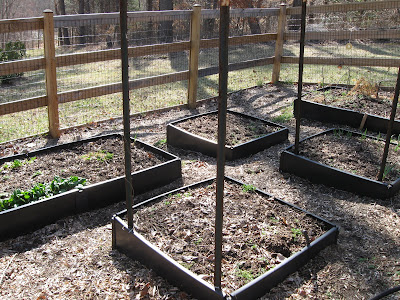 The entire fenced part is too narrow for the deer to jump into without damage to themselves, so now I'm back into growing my own vegetables and blueberries. This will be the second year and I'm glad to "be green".

Robin at Garden of Eden graciously agreed to be tagged.
Posted by Marcia at 4:16:00 PM

Great post! I have on order 'Animal, Vegetable, Miracle' and look forward to checking into your other two recommendations. The picture of your daughter is darling. We are fighting the deer this year, too. That fence looks very nice. Thanks for participating.

Marcia, I am very honored but regret I cannot participate in this wonderful meme.
Have to say I really enjoyed your post, pictures, and book recommendations.

Just to let you know - I'm posting mine today!

Oh Emily is so cute in that picture! I love your house! Most people don't give a thought to using space & exposure correctly when planning a home....nice :)

Marcia love our pictures and a story of your beginnings on being green and gardening. I am not much of a reader but have a very good family heritage of living off the land which I am now trying to do in a very wooded property with the same natural critters you have.

If the snow ever leaves and the ground thaws I hope to be able to post on my blog as my gardens progress.

Sorry that should be your pictures.

I think my dad must have that first book too. The title sounds familiar and the cover looked familiar when I looked it up.

I am impressed how you have thought everything through so carefully from the house to the garden to the deer-proof fence. You are an inspiration. The Not So Big House is going on my reading list. Thank you for participating in The Earth Day Reading Project.