We jettisoned our tree contractor last Saturday.  Very unresponsive since we signed off on their proposal in late January.  Lots of run around when we did hear from them twice from January to June.  I searched Angie's List and found a contractor last Friday, he called me within hours and came Saturday to look at what we needed done.  We agreed on the price and he came with his crew of three on Wednesday of this week and completed the job on Thursday.  I gave him a stellar review on Angie's List.

Here are before and after photos. 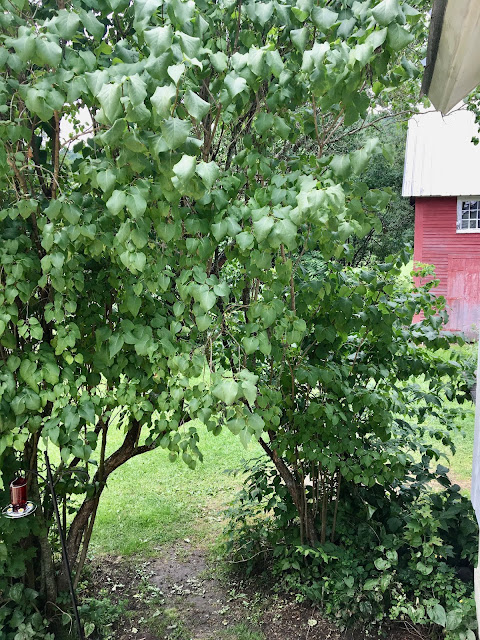 To the right of the slider as I come out on the deck was this jungle of lilacs.
Below gone! 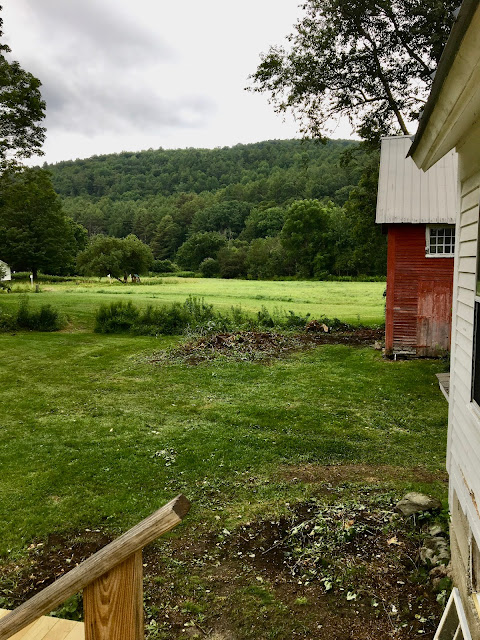 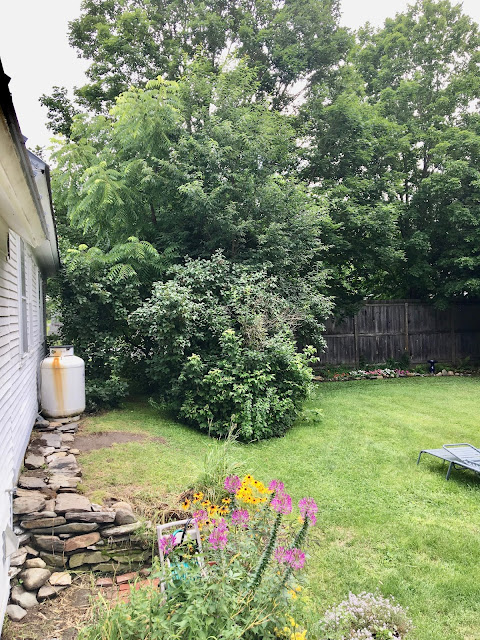 To the left from the deck more lilacs and other volunteer bushes and trees that had never been tended.
Below gone! 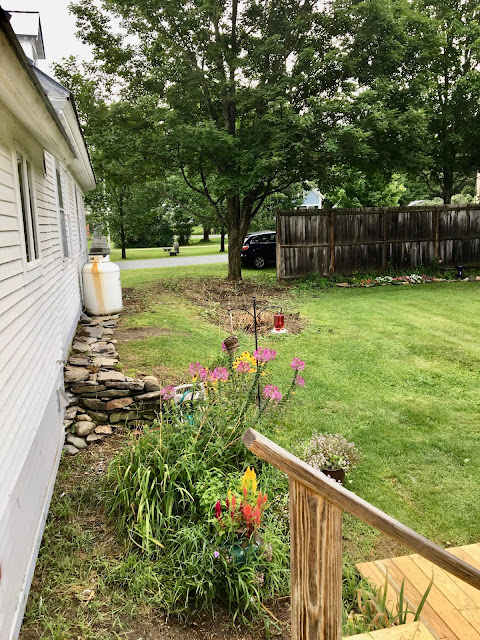 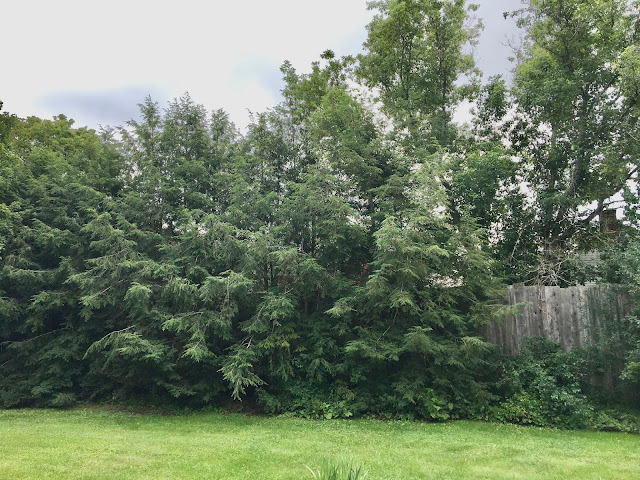 Looking straight out from slider hemlocks and bushes very overgrown.
Below hemlocks limbed up and topped and bushes gone! 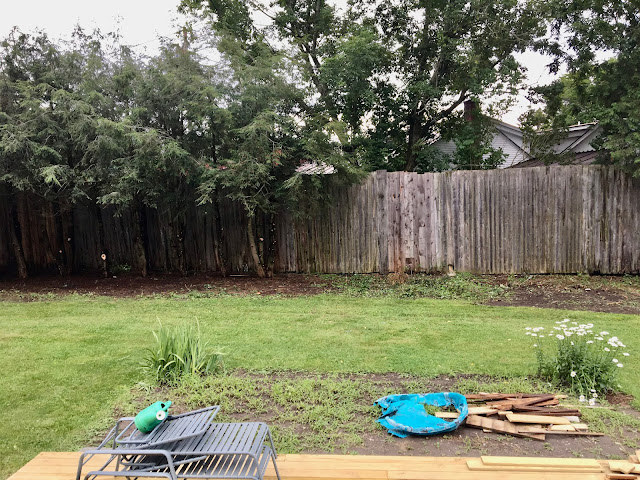 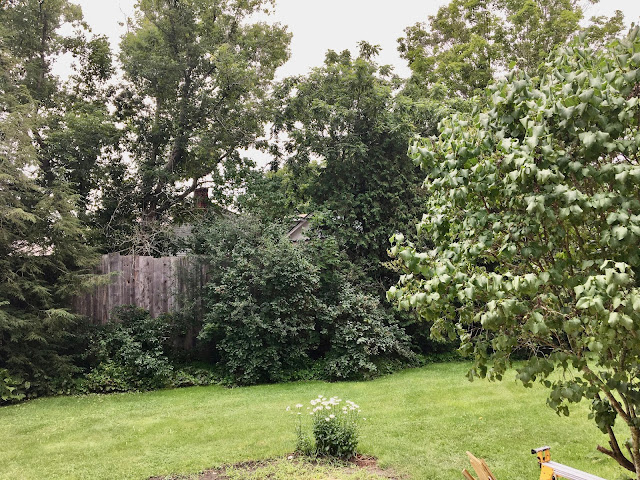 Same view from deck but looking more to the right.
Below the after shot. 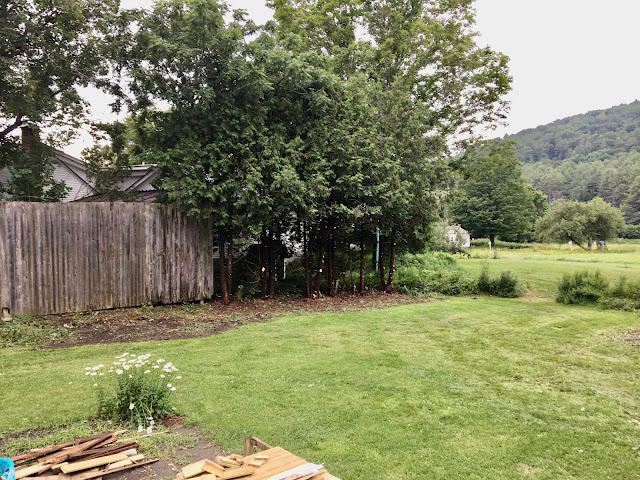 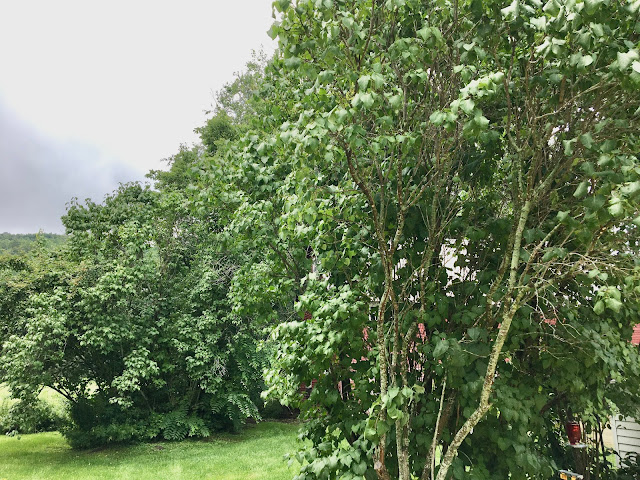 Our former view of the field and hill behind us and below our view now. 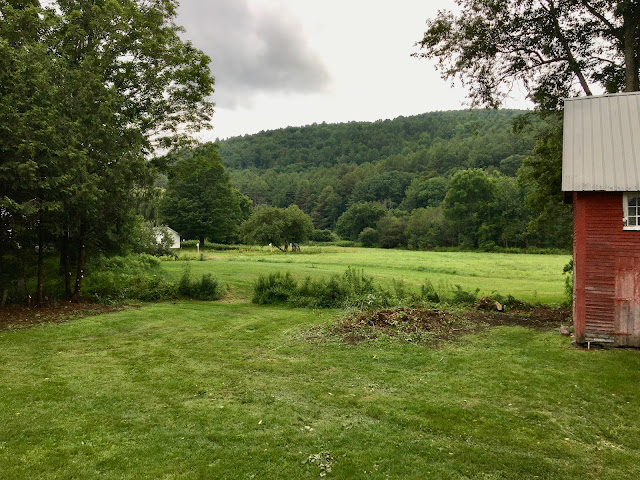 Much more to be done. That mound in the above photo was full of trees and bushes.  Now we need to level it.  Tim who mows for us has tapped his brother in law to help him move it to fill in low spots in the yard.  We need to tackle mulching to keep the weeds down.  Thankfully many of the root balls of the lilacs and trees were pulled out by the tree guys but there are still some that an excavator will have to tackle.
In other good news the carpenter finished the deck today.  I'll share more on that project when I get to return the potted plants to the deck and we have seeded the portion of lawn that used to be under the deck. The original deck was huge and we halved the size of it. 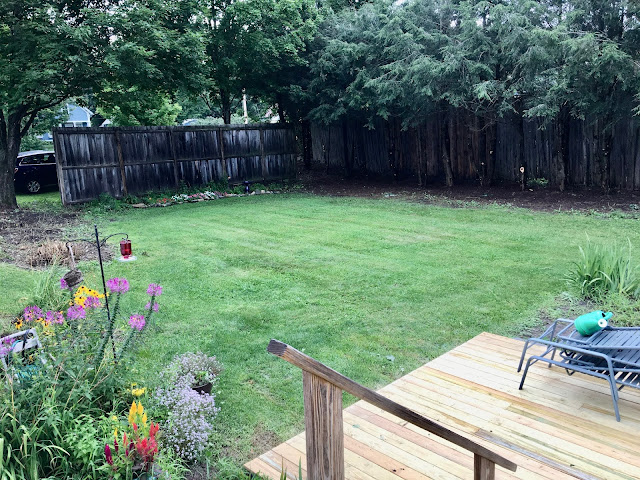 What a difference both to your place but in the two contractors.

Wow - you have a lovely yard. Looks so nice and cleaned up with all the overgrown shrubs and trees gone. Will look forward to picture of the new deck. Have a good weekend.

It's nice to get someone to do things in a timely manner. And I know you will love the new deck. It's the time of year to enjoy one!

I may like lilacs, but those were a bit over the top...and now they're gone! You definitely have a view through to the field now. I like it!

now it looks better you have much more light . kisses from Europe

It looks as though they've done a good job - and promptly too.

Good for you employing a different contractor. They have done amazing job. What a difference to your outlook.

Wonderful, and very satisfying to get work done. I too have found some reliable workmen and although it's expensive, things around my place are getting accomplished.

Glad you found someone to do the job. Still wondering what happened to our deck contractor.