We think of our country as a democracy but in fact we are a representative democracy for the most part.  The exception is in the states where townships hold annual town meetings to decide the budget and various actions for the selectmen to make. 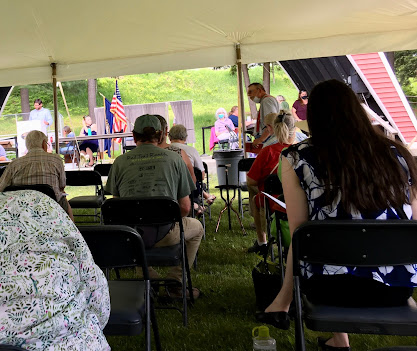 My township had its 2021 town meeting on Tuesday this week at noon. The town is 255 years old! Normally it's in March and held in the school gymnasium but because of Covid (what else) it was delayed until this month and held under a large tent at the fairgrounds.  Chairs were set up appropriately spaced out, but only a few people wore masks because NH has done a good job of getting vaccinated. 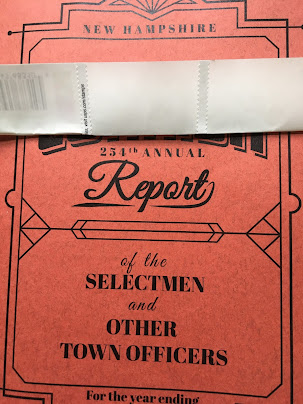 We didn't know what to expect but were given the Town Report for 2020 which had the agenda for the 2021 meeting. 21 Articles were put to vote ranging from salaries and expenses to adding to the Capital Reserve Fund for various items like bridges, fire equipment, and paving.  Those items were planning for the future.  When we got to Article 15 about supporting a resolution to require the New Hampshire General Court to carry out the redistricting required after the 2020 census without gerrymandering, there was some discussion to vote this down.  When the vote was taken the overwhelming response was to support.

Then we came to Article 16 to establish a Capital Reserve Fund for Renewable Energy.  $1000 was requested by the Energy Committee but what was not clear was what that $1000 was for.  With all the other Reserve Fund set asides voted on in the affirmative, there was specific planning identified. The Committee was not clear what $1000 would get the township and when.  This discussion lasted over an hour.  Lots of people spoke to the issues for and against.  Some discounting climate change, others questioning the expenditure now including the three selectman who had recommended that it not pass, still others speaking to the nature of solar panels and their life and how to dispose once no longer workable.  It went on and on.  I abstained because though I support the efforts to use renewal energy and recognize we have a climate crisis, the nature of what was requested was not well thought out.  The voice vote was not clear so a hand vote taken twice.  The article failed to be passed. The vote was 49-41! The committee does not go out of existence but will continue to recommend energy savings for the township.

The final item of business was to select people to serve for one year as Surveyors of Wood, Bark and Lumber, Fence Viewers, and Hog Reeves.  I think the first two have actual responsibilities but the latter are honorary and given to the couples recently married.  There is no need for a hog reeve in our town anymore. We don't have swine roaming doing damage to the community which a hog reeve would capture and assess damages to owners.  See Wikipedia for more here. 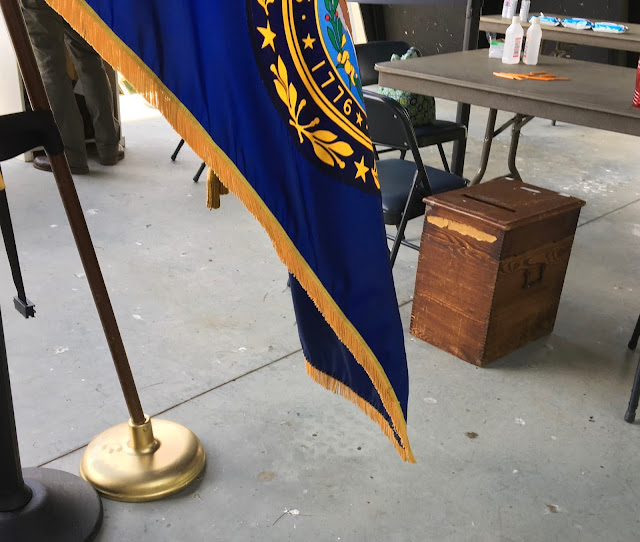 While the town meeting was happening, voting was going on behind the moderator.  I voted at the tail end of the meeting - paper ballot.  Only one position had two candidates.  I voted for the incumbent.

We headed off for a very late lunch.  It was wonderful to see democracy at work.

P.S. After the meeting we caught up with one of our contractors that we hadn't heard from.  It turned out he was the moderator for the town meeting. He's the one who will be trimming and felling trees and clear brush piles for us.  "Soon" he said!  I then had an email from his wife later that said maybe next Friday.  We'll see.

Then at the Deli where we got lunch, the barn contractor stopped in.  Dan spoke to him briefly but not about the barn.  I don't think he recognized Dan but it probably brought us to mind later when he realized who had spoken with him.

Getting out in town may have saved you a lot of time in getting local contractors to respond to you. Letting people see who you are and that you plan to be involved in life in your new town was a good idea!

Democracy is always at its best at local level.

It does seem helpful that you were able to not only get to the meeting, but to get responses from the contractors. The info about the hog reeve was interesting to look up.

Glad to see our democratic ideals in action! You all are becoming part of that small community by attending the meeting. Congrats!

Thanks for the play by play. I enjoyed it. Far different from the town meetings in the gambling town of Deadwood.

It is nice that at least one of your contractors is thinking of doing the work for you.